The Merchant of Menace by Richard T. Ryan 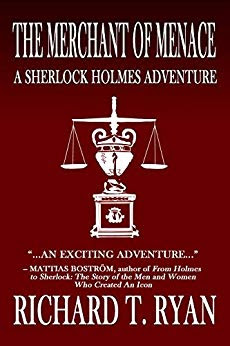 Sex: none
Violence: minor but nothing graphic

Reviewer's Note: I was given free copy of this book in exchange for an honest review.

Review: So, I don't usually read two books in a series so close together, especially for review, but I really enjoyed the first Sherlock Holmes book, The Vatican Cameos,  by this author so decided to give it a go. I knew immediately it was going to be great when I read that one of the characters was a Thornton, my maiden name, which you rarely see. Everything is a little better with a bit of Thornton in it, that's my motto anyhow.

This book is very different from the first in that it is set firmly in the 20th century with no trips to the distant past; it is pure Sherlock Holmes. The writing is great, the pace clips along and the story is engaging. I really enjoyed the 'crime' and the 'criminal', nicknamed The Merchant of Menace by Dr. Watson. Holmes seems to really enjoy this adventure, matching wits with a capable adversary who taunts him with messages that serve only to inflame his desire to catch the culprit.

Holmes gets up to his usual secretive ways, employing his gang of street boys, and the donning of multiple disguises. Poor Watson, our narrator,  was left in the dark on this one. I think the relationship between the two men is well done and very much in keeping with the original Conan Doyle stories. The dialogue between the two is great as Dr. Watson tries, but ultimately fails, to match wits with his friend.

Some books I read for fun, some to learn, but it's always a pleasure when the two elements are combined, as was the case in both The Vatican Cameos and  The Merchant of Menace.  For instance, a piece of jewelry featured in this book is the Tara Brooch, a national Irish treasure. Being of Irish ancestry, I had to halt all reading and get a look at this thing; gorgeous. I also read a bit about the jeweler Faberge, and other items mentioned in the book. Anyway, that's just me but it added to my enjoyment of the book.

Recommendation: I highly recommend this book to readers who adore Sherlock Holmes and love reading new adventures with him and Dr. Watson. You will not be disappointed. Anyone who likes a good crime/sleuth novel will enjoy this book, even if you somehow don't know who Sherlock Holmes is. (Is that even possible?)

My next review is coming soon! I'm currently reading Treasure of the Blue Whale by Stephen Mayfield. Bookmark this page!