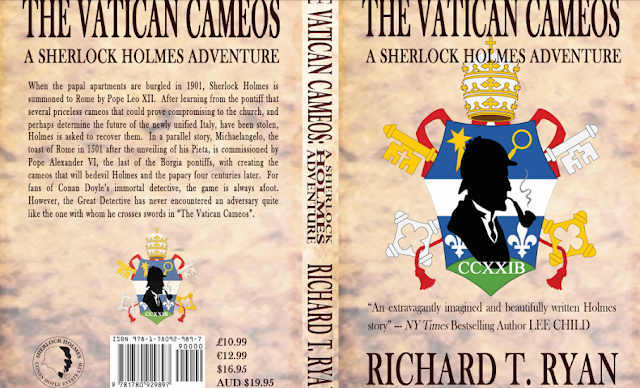 Who doesn't love Sherlock Holmes? Did you know there is a publishing company that publishes (I just made that word up) writings? MX Publishing exclusively publishes works centered the legendary detective. I think that's pretty cool. What would Arthur Conan Doyle think of the myriad television show, movies, books, even a Sherlock Holmes tartan should you desire to dress like him?  This brings me to the reason for this post, the book, The Vatican Cameos. ﻿﻿

The Plot: As the title implies the plot centers  a collection of cameos, stolen from the Vatican to blackmail the pope. Narrated by Dr. John Watson, Holmes' companion and sidekick, the detective must find the cameos and unmask the blackmailer. But that's only half the story. The chapters alternate between the years 1901, when the theft occurred and 1501, the year to make the fictitious cameos for another pope, Rodrigo de Borja, Pope Alexander VI. The story flip flops between the two each building to a satisfying conclusion.

The Characters: It's been a long while since I've read one of the original Holmes books, but as I dived into the story, it seemed to ring true. Holmes is quirky and Watson steady. The Pope makes for a believable victim and the bad guy is just the right side of despicable. The Michelangelo chapters are brimming with Borias, including Lucrezia, Leonardo da Vinci, and lots of naughty clerics. ﻿

The History: Normally, I wouldn't include history in a mystery book review, but because historical fiction plays such a huge role in this book, I had too. I really enjoyed the historical chapters. As a catholic, I am pretty familiar with the history of the church, so goings- did not surprise me, but I found them fascinating all the same. I enjoyed reading about Michelangelo and his fellow artists, the city of Rome and the tidbits about Savonarola, the fanatical friar. ﻿﻿

The Writing: I thought the writing was excellent. Both stories were fast-paced and zipped along. The book , always a bonus.

Overall: The Vatican Cameos is the perfect book for a reader hungry for more Sherlock Holmes, especially if you are keen on the original Sherlock. A very entertaining read.

Recommendation: I would recommend this to anyone who enjoys a good mystery. I would caution prospective readers that there are some very racy scenes which might put you off the story, but they are integral to the plot.

In the next few weeks I'll be reading a second Holmes Book by this author. I'll link the post when I'm done!

My Rating: I give this book 4 stars ⭐⭐⭐⭐ on the Jeanie Rating scale

5 Stars: So good, I might read it again sometime! Highly