Wrong Man Down: A Millie Henshawe Novel by Jerry Masinton 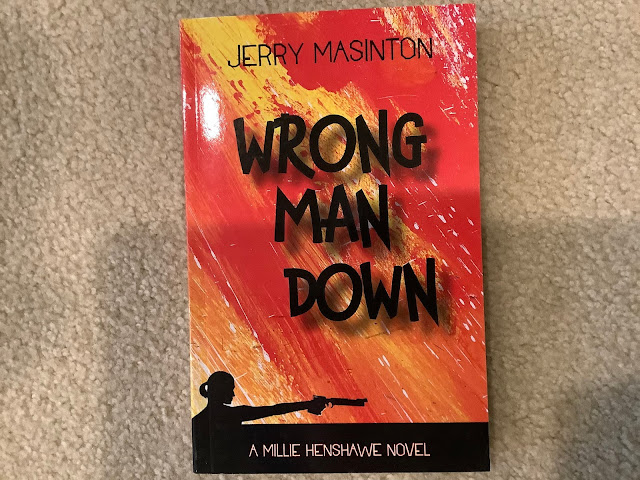 Today, I'm taking a break from my usual genre; historical fiction, to review a book about a hitman, well hit lady by author Jerry Masinton. First the details:

Jerry Masinton is a retired University of Kansas English professor.  He has published books on the English Renaissance dramatist Christopher Marlowe and the mid-20th-century Irish novelist J. P. Donleavy, as well as numerous articles on modern literature and several short memoirs in Voices of the Great Plains and The New Mexico Review.  He was an editor for the Easton Press Complete Works of Ernest Hemingway.    From the mid-1970s to the mid-1990s he reviewed books for The Kansas City Star.  He has delivered public lectures on Marx, Freud, Modernism, and Romanticism.  He and his wife Martha, a retired editor and publisher, live in Lawrence, Kansas.  They have two daughters, nine grandchildren, and one great-granddaughter. 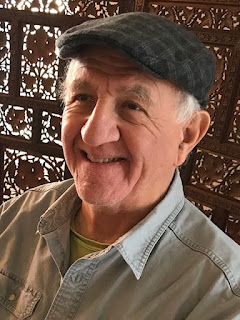 Millie Henshawe--intrepid, smart-talking, gay ex-GI--is the field agent (hired gun) for Continental Removals, LLC, in Boston, a niche firm catering to very special clients. Millie's well-honed skills are tested when the unexpected happens and the hired gun becomes the target! A pitch-black comic novel. Gallows humor and dead-on dialogue.
This fun, off-beat, murder mystery introduces wacky, unconventional characters. Millie's boss Ralph Klammer and his assistant Mary Michael Mulloy, who founded Continental Removals around the time of the Vietnam war with Ralph's mother, Sheila. Their assassin out-fitter and clean-up guy, Mr. Moustakas, Jauncey Chambers, the off-kilter driver for Millie's first hit who thinks the whole set-up is just like the movies. And then there's Ray Roth, a sad-sack gambler who leads Millie to an unlikely story and the unsettling truth about the business.
The author keeps the reader guessing with zany zig-zags in the plot, and the dialogue pops with energy and invention. Whether it's Jauncey's be-bop cadences, the Mob-speak of thugs, or the high-wire improvisations of Ralph when he, Millie, and Mary Mike get together for postmortems, the punchy dialogue sets a new standard in fun murder mysteries.
Wrong Man Down is the first Millie Henshawe novel in the series, followed by Who's Who Among the Dead. These novels upend and reinvent the genre of crime fiction. Millie, the killer, is also the detective: she is the one who understands everybody's story, figures out all the details of the fiendishly complicated plots, and explains how everything fits together.
Part of the fun comes with the off-beat, original characters she meets. There's Jauncey Chambers in Wrong Man Down, the off-kilter driver for her first target who thinks the whole set-up is just like the movies. And there's Ray Roth, a sad-sack gambler who tells Millie an unlikely story that nevertheless leads to the unsettling truth underlying the entire plot.

Reviewers Note: I was given free copy of this book in exchange for an honest review.
You know this gal loves her historical fiction, but sometimes ya need to take a break and snack on a different genre. When this book popped into my inbox, I knew I wanted to read it. It did not disappoint.
The story snags you on the first sentence then delivers a plot full of unexpected twist and turns, just what you want in a good thriller. Keeping a tight rein on the narrative, the author doesn't let his characters ruin the story with impossible or unbelievable actions.
What really makes this a great book though are the characters. Millie and her donut connoisseur boss Ralph and other goofball co-workers are a treat. Millie is a contrast in character. On one hand she's a cold blooded killer. But she's also a great friend, and lover. She shows compassion to a pair of unexpected characters who need a helping hand.
But wait, there's, more, the pages come alive with a colorful cast of characters, shady targets, unwitting bystanders, and double crossing clients. The dialogue is dark, funny and smartly written.
The delicious narrative zips along in this well edited, fast paced book. It was a quick two day read as I couldn't wait to finish. The story ends with a final satisfying twist that will leave you hungry for the sequel and a cream-filled cannoli!
Thank you to author Jerry for giving me a copy of his book.
My rating: I give this book ⭐⭐⭐⭐⭐ 5 stars