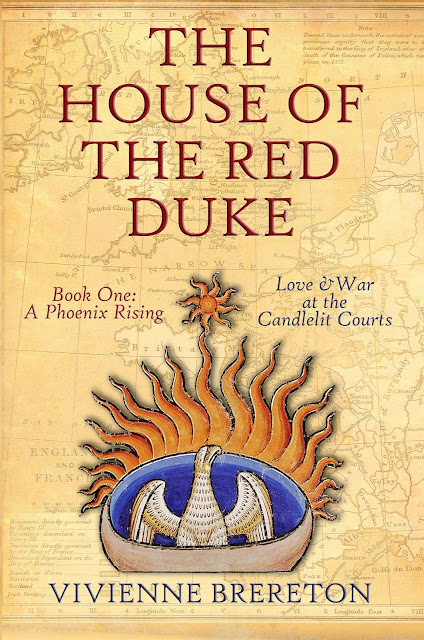 It's Tuesday and that means it's time for another exciting author interview. Today I am delighted to have Vivienne Brereton, author of The House of the Red Duke, part of a series on Thomas Howard, Duke of Norfolk.

JMR- Welcome to the Book’s Delight, Vivienne, tell us where you live and what you do for fun. What does the perfect day look like?

VB Thanks so much for inviting me, Jeanie. It’s a pleasure to answer your questions. I have lived in six different countries in my adult life, including the US. I have very fond memories of my time in Austin, Texas and Portland, Oregon. I now live in the South of France which sounds far more glamorous than it is! I live in a small village which I love. It was built in 1519, during the reign of François I at exactly the same time of the setting of my novel. So I do open my front door onto a piece of history. Swimming, and walking in nature are my two favorite ways of unwinding, apart from getting together with good friends, reading, listening to music or watching Netflix with that forbidden extra piece or two of chocolate.

The perfect day for me right now (as for so many) would be a trip somewhere with my family, perhaps into the hills from where you get a fabulous view of the Mediterranean. But just being with them anywhere in the world would be amazing as I haven’t seen them for so long and really miss them.

JMR- Would it be fair to say that the Tudor Period is your favorite time period? Do you have a second choice? What and why?

VB I’ve always loved the Tudors, right from a very young child. Which I think is quite unusual because it was long before ‘The Six Wives of Henry VIII’ hit the TV screens. My parents said they used to call me ‘The little Tudor madam’ because I wouldn’t stop talking about them. In a past life perhaps…? My second choice would be Regency England which has produced so many brilliant novels, with the Queen of them all: Jane Austen at the top but with Georgette Heyer not far behind and many excellent contemporary novels.

JMR- What is it about the Tudors that fascinates so many people? There is almost what you could call a cult following for all things Tudor. What draws you to them?

VB Jeanie, I totally agree. There is a cult following (including me, ha ha!) and every time a new movie or TV series pops up, it starts all over again. I think they’re so well-liked because they were larger than life, fabulously wealthy, their clothes and jewellery the ultimate in Kardashian bling, They lived in amazing castles and manors, with such verve and dash that we can almost reach and touch them to this day. And they had so many flaws it makes them more human and relatable, not remote and out of touch. If you sat down and imagined the most dysfunctional family in the world, yet charming and likeable, surely the Tudors would be top of the list. If they were alive today, they’d sell out at every newsstand every week with their drama: failed marriages; shady goings-on in various castles; question marks over missing relatives, presumed murdered; take-overs which involved an entire country; wives who needed to produce sons and couldn’t. Best - or rather worst - of all: one of the most powerful man in Christendom who couldn’t father a son and blamed it on his poor wives, forcing two of them to pay the ultimate price for their failure.

JMR- Who is your favorite Tudor and why? What’s a burning question you’d like answered about them or another Tudor favorite?

VB It has to be Anne Boleyn. She is the most elusive of them all. She died a dreadful death and I think her revenge was to be out of reach for eternity. With all the characters in my novel, after extensive research, I really felt I knew them inside out. In Anne’s case, this was nearly impossible. She was so badly hurt by her time at the Tudor court that I think she took everything with her when she left: the very essence of her. We don’t even know for sure how old she was. The most common date given is 1501 which makes sense to me but it has been put as late as 1507. I’d love to meet Anne for lunch on the beach, kick back with a glass or two of rosé and ask her all the questions I hope I’ve answered in my novel but am not sure. She appears as the best friend of a major character but she makes her presence felt. As we stretched out our feet on the warm sand, I would ask her if she truly loved Henry or whether she still loved Harry Percy to the end. I see another life she could have had with the Earl of Northumberland’s son. One that brought her many children and happiness. 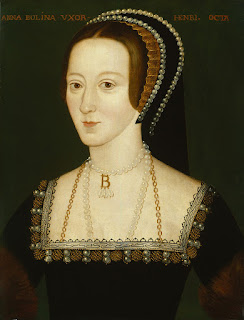 JMR-You’ve visited most if not all the Tudor sites. Where did you feel closest to them?

VB  Hever Castle. The home of Anne Boleyn. It’s smaller and more intimate than Hampton Court and you are treading the grounds of the same place she did all those years ago.

JMR- Do we know everything there is to know about the Tudors? During your research, what detail surprised you the most?

VB You always hope that history is going to yield up more secrets and it’s thrilling when it does. A good example of this is the newly-discovered portrait of Mary Boleyn which was languishing in the bedchamber of Mary Queen of Scots in the Palace of Holyrood House, Edinburgh, Scotland. It was labelled ‘Portrait of a woman’, in other words, an unknown woman lost to history, until June, 2020. I found it so exciting because I gain so much information from portraits, studying them in books, or far better, up-close in a sixteenth century original setting.

JMR- I think it’s really neat that you include recipes in your book. Tell us about some of the things you’ve cooked. My characters eat a lot of Pottage. Have you ever tasted it?

VB That’s interesting, Jeanie. I’m looking forward to reading your novels. The recipes happened by chance. I was trying to get the reader to be drawn back in time, using all their senses. My novel covers four countries so I added maps, historical background and a guide to all the characters. I liked the idea of recipes and of course was going to leave it to the experts. Getting in touch with those who’d written French medieval and Tudor cookery books turned out to be far harder than I thought. It was impossible to contact the authors directly and one agent asked for $50 just to include one recipe for one time only! The heart-warming exception to this was Sophie Jackson who generously allowed me to select two recipes from her lovely book ‘The Medieval Christmas’, with only a mention of her as the author as her price.

With the other recipes, I thought, wait a minute, how hard can it be? You’ve got all the original sources yourself of the cookery books of the time. Do it yourself. So I had enormous fun sending off to specialist firms for ingredients you wouldn’t normally use such as long pepper or grains of paradise and saffron. I made every single recipe in the book including pea pottage which turned out to be extremely tasty. I was surprised at how all the food had a Middle Eastern flavour, probably because of all the exotic spices they used. And no, they didn’t eat bad meat or have atrocious table manners. Quite the opposite in fact.

JMR- Vivienne tell us about your book, A Phoenix Rising.

VB It is a novel about love, ambition and intrigue. I wanted to include a blend of real historical characters and fictional ones because I knew it would be more fun for me to write. The central character who links all the others together is Thomas Howard, head of one of the most powerful families in Tudor England, and future grandfather to two of Henry VIII’s queens. Sent to the Tower for supporting the wrong king at the Battle of Bosworth, Thomas rises from the ashes of his family’s fall from grace. The Prologue takes place in Zennor Castle, Cornwall on Twelfth Night,1497. Here we find Thomas’s favourite son, Edward, plighting his troth to Cecily Tredavoe, daughter of a Cornish lord. Turning the page to find out what happens next, we find ourselves fast-forwarded to 1520 where preparations are in full swing for the extraordinary Field of Cloth of Gold, where virtual celebrations for its 500th year anniversary in June have now completed.

JMR- What is book two about? When can we read it?

VB Book Two is called ‘Beware the Lizard Lurking’ and continues the story. Thomas Howard is a keeper of secrets but as the old saying goes ‘there are no secrets that time does not reveal.’ It will be published on February 12th, 2021, right before the name day of one of the main characters: Valentine de Fleury.

JMR- Tell us how we can follow you on social media and the web?

VB Jeanie, I’ve loved answering your questions. They are so interesting and as they’re about my favorite topic, the Tudors, what’s not to like? If I had to come up with one question it might be one that you as a fellow writer will appreciate.

What do you think writers appreciate the most?

Apart from readers who are kind enough to make contact and show their appreciation, I think it would be gratitude to those who also take the time to post a review. Hopefully not a bad one, ha ha! But it is the reviews that make all the difference to a writer, and are usually the reader’s first port of call to help them make up their minds whether or not to buy a book.

Thank you, Jeanie, for letting me come on. I do hope your readers enjoy reading my replies to your questions as much as I enjoyed answering them.

JMR- I totally agree with this one. Reviews can make or break a great book. So, listen up readers, go back to Amazon or Barnes and Noble or wherever you bought your book and leave a review! Click the Amazon button below to see more information about Vivienne's books.

Thank you Vivienne for a very enjoyable interview. I wish you great luck with your books, I look forward to reading about Thomas Howard. Stay safe!