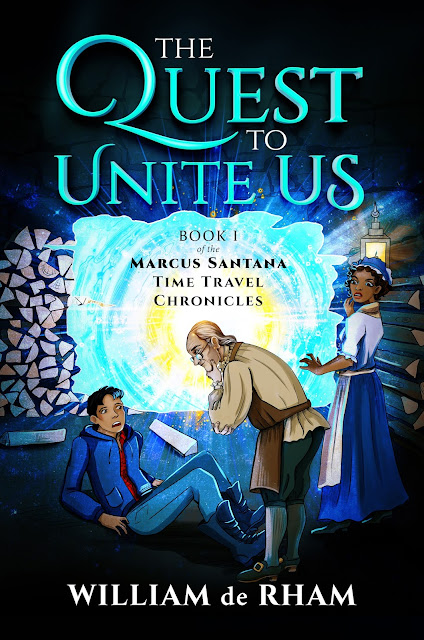 Welcome readers! Today we have a guest author on the Book's Delight; William de Rham. William has recently released a young adult time travel book. I asked him to stop by and tell us about his novel, the setting and why he chose this particular historical setting. 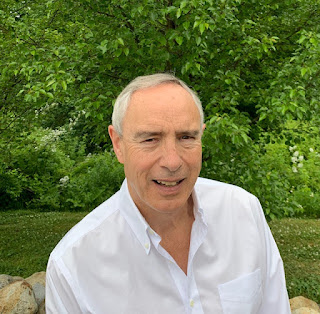 There is a new time travel novel on the market: The Quest to Unite Us—Book I of the Marcus Santana Time Travel Chronicles by William de Rham.

In Quest, a wormhole opened by an ancient meteor sweeps 17-year-old Marcus from his modern-day Philadelphia home and into Benjamin Franklin’s 18th century cellar.  The date is now May 25, 1787, the first day of the Constitutional Convention.

Family and school obligations demand that Marcus get back home—and fast! But Franklin has no idea how to send him.  Until the world-famous scientist and inventor can figure a way, Marcus will have to remain, stuck in a Philadelphia without electricity or any other 21st century convenience. Joining Franklin’s household, the charming, sometimes hot-headed teen agrees to serve as the elderly sage’s secretary and promptly falls in love with the Franklin family’s cook, beautiful Elise, who escaped slavery in Haiti but is in continuing danger of re-capture.

At the convention, Marcus records the nation’s most celebrated leaders—including Washington, Hamilton, and Madison—as they struggle to design a government that will unite the deeply divided states into one nation. But Marcus is outraged by their attitudes and actions towards slavery. And the delegates, and even Elise, are outraged by his outrage! Will anyone listen to him when he discovers a ring of saboteurs plotting to destroy the convention and return the American states to British rule?

Historian Keith Arbor called Quest: “An accurate, deeply engaging work of historical fiction about Benjamin Franklin and the Constitutional Convention of 1787 to be enjoyed not only by high school and college students, but homeschoolers and historians working with young people; as well as any adult seeking to learn more about our Constitution, its authors and the era in which they lived.”

Kirkus Reviews recently praised Quest, both for its “lively and humorous prose” and as “a familiar but thoughtful and engaging time travel tale.” (See the review.)

When asked what led him to write Quest, author William de Rham explained: “I used to practice law in Philadelphia. My office was across the street from Independence Hall. On really hot, really humid summer evenings, on my way to meet my wife and friends for dinner, I’d cross its back yard, see fireflies flashing in its garden, and wonder: Is this what the Founders—men like Benjamin Franklin, George Washington, and John Adams—saw when they’d finished their labors here and were headed to supper at a nearby tavern? I so wanted to be able to travel back in time to meet those men and to experience the times in which they lived.

I especially wanted to get to know Franklin, a self-taught, ‘renaissance man’ of such achievement: printer/publisher, author, humorist, businessman, world-renowned scientist, inventor of so many useful devices (including the lightning rod, swim fins, and bi-focal glasses), politician, post-master, public servant, revolution-maker, diplomat, philanthropist, and a drafter and/or signer of both the Declaration of Independence and The Constitution of the United States of America.  And that barely scratches the surface!

I also wanted to learn more about our Constitution and how and why it came to be.  I’d studied Constitutional Law as a law student and occasionally encountered constitutional issues representing clients.  But I didn’t know a lot about the Constitution’s history, or the men who created it, or the problems they were trying to solve, or the challenges that stood in their way.  And that seemed to me, as an American, somehow … not right. So, I did some research—a whole lot of research—and discovered what I hope readers will find a fascinating story.”

For more information about The Quest to Unite Us, or to purchase it as a paperback or e-book, see: