The Lumbermill by Laya V. Smith 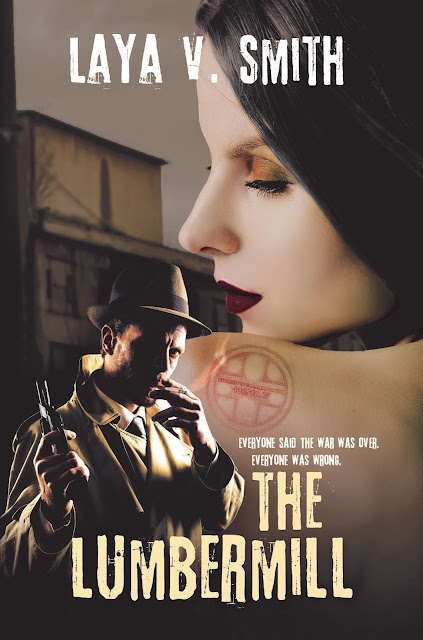 Los Angeles, 1954.
Sending a pair of mass murderers to the chair got his name in the papers, but veteran fighter pilot turned detective, Augy Small, couldn’t celebrate. The culprits confessed, but the cops only ever found one body. Who had the killers died to protect?
Katya Tyler, a Russian enigma with a wad of cash in one hand and a hit list in the other, claims to have the answers. First, she wants Augy’s help to bring down a massive underground network of human traffickers.
As the case unfolds, every clue is an echo of his past. The horrors he experienced in the Pacific, shadows of scars he still carries, and rumors of a place long since destroyed. The Lumbermill is back in operation. Every day more innocents are harvested, their screams muffled in darkness. And the only way Augy can stop it is to go back into the nightmare he thought he’d escaped forever.

Reviewers note: I was given a free copy of this book in exchange for a fair and honest review.
Plot in brief: Augy Smalls is a down on his heels private detective, living on luck, burning through his friends, family and any lingering affection from his ex-wife. Life goes from bad to worse when his hits a woman, Katya, on a dark road. He is drawn into a twisted deadly dystopian world with tentacles reaching back to World War II medical experiments on innocent people. To save himself and those he loves, Augy must hunt down the killers and put and end to their evil operation.
Characters: I loved both the main characters, Augy and Katya. He's an ex-air force fighter pilot, who spent many brutal years in a POW camp after being shot down. The scars on his body bear witness to his years of captivity but it's the unseen scars on his psyche that threaten to cripple him. Katya is a Russian beauty bent on revenge, her past is just as dark as Augy's. The pair surround themselves with a colorful cast of feisty characters and you cheer them on, hoping somehow they all survive.
The history: At the heart of this story is a dark, ugly and mostly neglected piece of history: Unit 731, the Epidemic Prevention and Water Purification Department of the Kwantung Army. Most people are familiar with the despicable acts perpetrated by German doctors on Jewish and other peoples in concentration camps during World War II, but few, I wager, know about Unit 731, run by the Japanese army. The 'experiments' conducted were equal to if not in excess to the horrors of the Nazis. The history of Unit 731 is an integral part of the story which takes place in 1950s Los Angeles.
The Writing: I thought this book was very well written. The pace is very fast, there is action on almost every page. The editing was great with only a couple of minor typos.
Overall: From a great first page to a satisfying ending, I was totally engaged by this story. As a word of warning, this book is not for the faint of heart and has a mind boggling body count. The reader must set aside a bit of reality to accept the story line, especially when it comes to Augy who sustains severe injures to almost every body part at least once during the narrative, still manages to run, climb, and carry grown women over his shoulder. It is reminiscent of a gritty James Bond without the martinis and sports cars.
Recommendation: I would recommend this book to readers who enjoy detective/crime thriller/mystery tales that are dark and twisted and are not turned off by graphic violence.
I rate this book: ⭐⭐⭐⭐⭐5 Stars