The Gopher King; A Dark Comedy by Gojan Nikolich 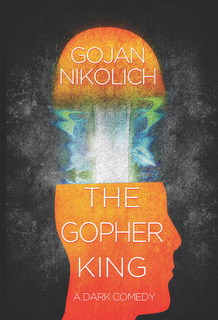 Hello Readers! Today's review is a very unique book, at least for me. It's set for release later this year. Here are some specifics:

Gojan Nikolich is a former Chicago newspaper reporter, editor and public relations agency executive. He graduated with B.A. and M.A. degrees in English Literature from DePaul University, served as a decorated U.S. Army sergeant with both the 2nd and 4th Infantry divisions and worked as a journalist in Korea and Japan. He lives with his family in Colorado, where he and his wife once owned a weekly newspaper.

A suicidal former platoon sergeant, sole survivor of a Vietnam War jungle ambush, is haunted by what he perceives as his cowardly past. Debilitated by guilt and mourning the death of his wife, small town newspaper publisher Stan Przewalski lives in a PTSD-fueled world where it is impossible to distinguish reality from fantasy.
Returning from a Vietnam sightseeing tour, his suppressed memories resurface with a vengeance as he deals with a murder and a raging wildfire that threatens to destroy his hometown of Bull River Falls, Colorado. The overly medicated vet meets a magical creature who wears paratrooper boots and rock band tee shirts and commands a subterranean army that believes Stan is the answer to their fight against unscrupulous real estate developers.
While they sabotage cell phone towers and government buildings, these supernatural friends provide an unlikely and outrageous path to Stan’s redemption.
What could possibly go wrong?

Reviewers Note: I was given a free copy of this book in exchange for an honest review.
This is a hard book to describe. Take a murder, a forest fire, a Vietnam Vet haunted by the past, an army of combat-ready gophers led by a charismatic leader, add a bottle of little 'blue pills' and shake well. There you have it, think Animal Farm meets The Rats of NIMH and add bit of Hamburger Hill/Good Morning Vietnam. This book is quite a ride.
The Characters: Stan is a haunted man. After a failed suicide attempt and a misguided trip to Vietnam, he is tormented by his memories of his two tours during the ill-fated war. He bears a heavy burden of guilt over the death of his platoon. He is so well drawn you can feel his pain, his regrets and his will to live as it ebbs away. His life is joyless and he exists in a drug numbing fog of depression. I really wanted to put my arms around him and give him a hug. Chaz, the gopher king is Stan's opposite. He takes great pleasure in life, he is engaging, funny, outrageous, intellectually curious, he wallows in all that money can buy or he can steal. And yes, he really is a gopher and yes, I found him totally believable.
The Writing: The book is well edited and well written. The pace is steady, told in first person, narrated by Stan, who may or may not be reliable. The plot is dense with lots of subplots, twist and turns. I found it very engaging and was sucked into the story right away. Laced with black humor you almost, but not quite, forget the deeper meanings threaded through the narrative. Never sure if the gophers are the workings of a broken mind, hallucinations run amok or actually real, I was absorbed by the prose. Stan's battle with PTSD, grief from the loss of his wife, the destructive nature of land development and the raw power of fire all intertwine into a thoughtful, entertaining tale.
You will never look a Milk Duds the same.
Recommendation: I highly recommend this book for people who enjoy a deep dive into the human psyche and can appreciate a dark sense of humor.
I rate this book ⭐⭐⭐⭐⭐ 5 Stars