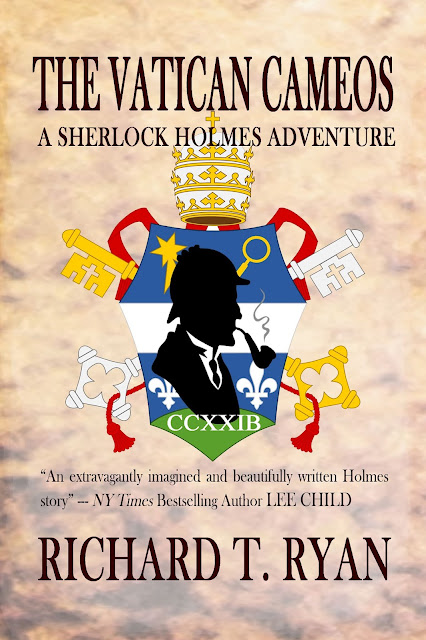 Welcome readers to today's author interview. We are talking with Ric Ryan author of multiple Sherlock Holmes novels. I've read three of them and they are great! So let's jump on into the conversation.

JMR- Hey Ric, welcome to the Book’s Delight. We’ve read three of your wonderful books and are happy to have you here today to talk about them. So tell us what where you live. What do you do for fun and what does the perfect day look like?

RR- Lately, I’m splitting my time between New York City, where I was born and raised, and Virginia, where I can visit my granddaughter. For fun, I play with Riley, she’s almost 20 months old, and I read a great deal and do a lot of freelance editing. I also write, which for me is fun. If we ever put this Covid behind us, I’m going to try to get some golf in. I like to sleep in, but I also enjoy staying up late. Most of writing and editing takes place between midnight and 2 a.m. 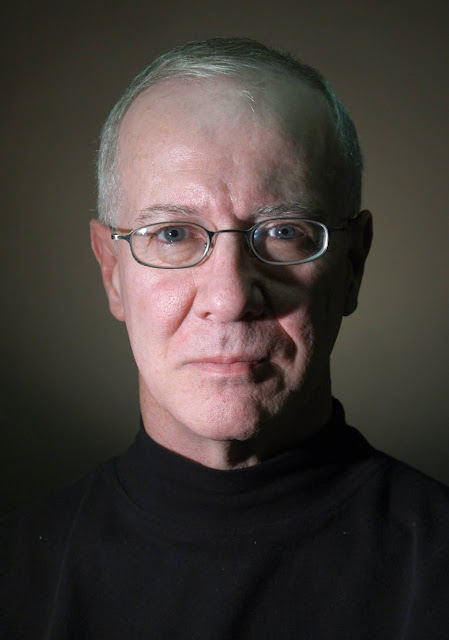 JMR- You graduated from Notre Dame (Go Navy!) with a degree in Medieval Literature and you work as an editor. What made you want to write? Was it easier/harder than you imagined?

RR- My first career was teaching high school English, and I had some incredibly talented students. I still remember some of the assignments they turned in. Reading and correcting their papers prepared me for my next stint as newspaper editor. During my 30 years at the paper, I wrote two nationally syndicated columns and various articles and editorials, so I was always writing. Although I had started several novels over the years, as I neared retirement I was determined to finish one. The result was the “The Vatican Cameos.”

JMR- Clearly, you are a great fan of Arthur Conan Doyle’s Sherlock Holmes and have written multiple books, in the style of the originals. Why? What gave you the confidence to walk in his shoes at it were?

RR-I fell in love with the Holmes character while I was a graduate student at Notre Dame. Back in the ‘80s, I wrote a Sherlock Holmes trivia book as well as an Agatha Christie trivia book. I think there is something timeless about the character. We admire his deductive abilities, and I think we all wish we could string together the chains of reasoning as he does. Having read so many other pastiches over the years, I thought I could put my knowledge of the Canon to good use by creating my own homage. It is a daunting prospect to walk in the shoes of Sherlock Holmes. You need to hit the cadence of a Victorian speaker, not to mention the grammar. At the same time, you must be wary of Americanisms and anachronisms slipping in. So for me, it’s always 1895.

JMR- How did you get inside Sherlock’s head? How do you develop the plot and resolution of the crimes? How have your books moved Sherlock’s story forward?

RR-I regard myself as logical, so it’s easy to relate to Holmes on that level. For me at least, writing particular scenes has to be done in reverse. You know the conclusion then you construct a series of steps so that you arrive at that conclusion. As for developing the plot, I am strictly a “pantser.” I never know where the story is going to take me or what’s going to happen. I often paint myself into a corner and it may take me a while to figure out how to extricate myself. The big thing, and I still have to remind myself of this, is I can make anything, within reason, happen. So while I’m writing, I just think, “Wouldn’t it be cool if …” To that end, I think I’ve moved Holmes forward a smidgen or two by introducing new elements in my story which other writers may not have used yet. However, they can, if they wish, then appropriate such elements to advance their own tales.

JMR- What has been the best compliment on your books?

RR- There are two remarks of which I am quite proud. Lee Child, the creator of Jack Reacher, was gracious enough to read my first book, “The Vatican Cameos” and provide a blub for the cover. He described the book as, “An extravagantly imagined and beautifully written Holmes story.” The other remark that makes me smile came from Sherlockian author Tom Turley who noted, “Richard Ryan channels Dan Brown as well as Conan Doyle in this successful novel.” It’s a notion that has been noticed by other readers, and I am such a fan of Brown’s that to be mentioned in the same breath is truly an honor. 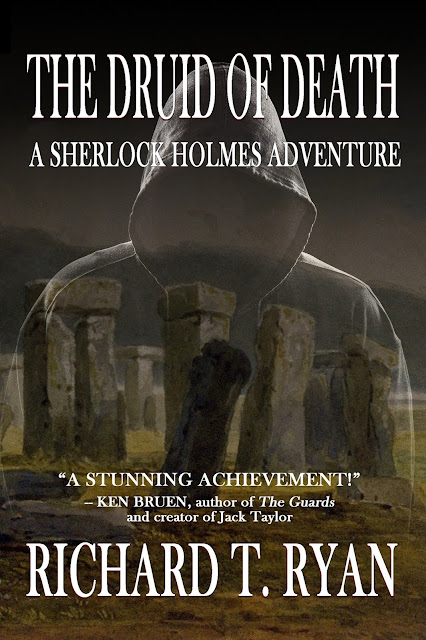 JMR- Why, after more than one hundred years do we still love the very peculiar Sherlock Holmes and kindly Dr. Watson? Let’s face it, Sherlock does not fit the modern idea of a superhero/ macho man type character.

RR- I think as a character, we admire Holmes’ reasoning ability and to some degree his sangfroid. We never see Holmes ruffled in the Canon although other authors and filmmakers have gone to great lengths to humanize him. Watson is the epitome of loyalty, and they may well have been the prototypes for all the “buddy” movies that have come out of Hollywood. The other reason that Sherlock has remained popular is that he has been brought to life by a series of great actors, from William Gillette to Basil Rathbone to Jeremy Brett to Benedict Cumberbatch, and to a lesser degree Robert Downey Jr.

JMR- There have been multiple actors who have portrayed Sherlock. How is your favorite and why? I won’t tell you who mine is but his initials are BC.

RR- I’m a traditionalist, so I’m torn between Rathbone and Brett. One can only wonder how the rest of the Canon might have been handled had Universal Studios decided not to have Holmes fight the Nazis. Brett was such a stickler that he would often bring scripts to the writers and insist that they stick to the story as written by Doyle. I enjoy Cumberbatch’s Holmes and I’m especially taken with Mark Gatiss as Mycroft, which runs counter to the Canon in a number of ways. To be fair, I also enjoy the pairing of Jonny Lee Miller and Lucy Liu in “Elementary.”

JMR- I have to admit I did enjoy the Miller/Liu combo. I thought casting a female as Dr. Watson was brillian. 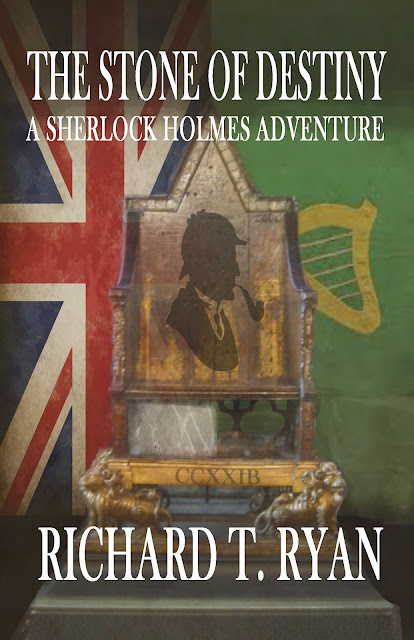 JMR- Some of the modern interpretations of Sherlock are of a psychologically damaged or possibly neuro-diversive man. What’s your take?

RR- The original character was conceived by Doyle as a sort of automaton, a thinking machine. As such, he is aloof and detached from society. One of the great quotes from “Sherlock” is when Holmes proclaims: “I’m not a psychopath, Anderson. I’m a high-functioning sociopath. Do your research.” It sums him up perfectly. He is anti-social to a degree, but he returns Watson’s loyalty. His social circle is quite limited, but I don’t think he would have it any other way. Much the same can be said of Miller’s interpretation in “Elementary.”  Of the two, I find Cumberbatch closer to the original. 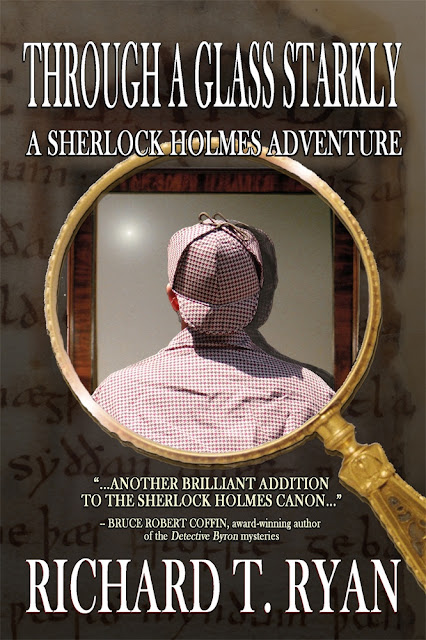 JMR- Tell us about your books? What’s next?

RR- My first book is titled “The Vatican Cameos.” The titles comes from a reference at the beginning of The Hound of the Baskervilles, so it’s one of the many untold tales in the Canon. In the book, Pope Leo requests Holmes come to Rome to recover the cameos that could prove embarrassing to the Church. All the odd chapters are set in 1901 with Holmes and Watson while the even chapters are set in 1501 and revolve around Michelangelo, who created the cameos. In “The Stone of Destiny,” I send Holmes to Ireland to recover the Coronation Stone, stolen during Queen Victoria’s funeral. In “The Druid of Death,” the Great Detective must bring a serial killer to justice while The Merchant of Menace pits Holmes against a brilliant thief-for-hire, a situation to which he can only react as he never knows where the thief will strike next.

My new book, “Through a Glass Starkly,” will be released in October. In it, Holmes is conscripted by Mycroft to protect a top-secret peace conference in the years before World War II. However, he suddenly finds himself deluged by cases, including the only manuscript of “Beowulf,” which appears to have gone missing.

In all my books, I try to write “to delight and teach” as Sir Philip Sidney suggested. If you do not like history, I’ll never be your favorite author.

JMR- Tell our readers how to find you on social media.

JMR- What question were you hoping I’d ask but didn’t.

RR- I was really hoping you’d ask about the importance of the Canon. As good as the movies, TV shows and pastiches are, they all owe their existence to the 60 stories by Doyle. If all you know of Sherlock Holmes is Robert Downey Jr. or Benedict Cumberbatch, you really don’t know Holmes. My advice is enjoy what you like but ignore the Canon at your peril.

JMR-Thanks for coming along Ric and spending some time with us. It's been great talking with you. Readers you can find links to Ric's books in the book covers or click on the Amazon button below: 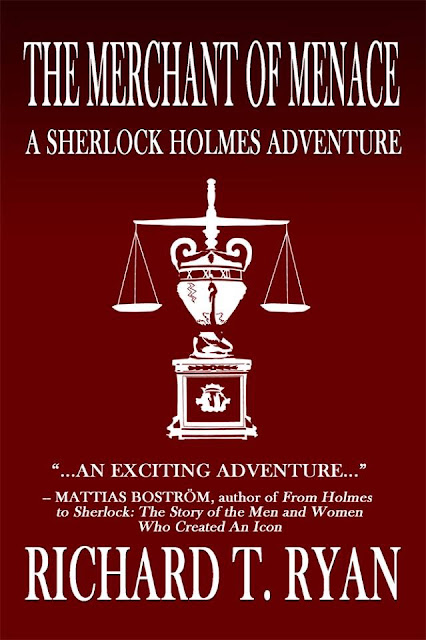