Best of Time Travel In Fiction

Time Travel: How authors get you into the past.

The Heron, my next book, will be published in April of 2020 by Black Rose Writing. I am so excited as the whole publishing process unfolds. But today I wanted to take a little time to write about time travel, one of my favorite genre's and a plot device in my upcoming book. I am especially enamored of travel to the distant past. The big questions is how do you get there and what can you do while you're there. Here are some of my favorite time travel books. Click on the links in the book covers to read more about them.

HOUSE ON THE STRAND. My first real exposure to the idea of time travel came from reading Daphne Du Maurier's book The House on the Strand, first printed in 1969. In the novel, the characters are able to view the past while under the influence of a drug. Their bodies remain in the present, which results in tragedy for some. The drug allows them to view the past without being able to directly interact with it. I found the idea fascinating and fell in love with the idea time travel. I think this would be my least favorite method of travel. 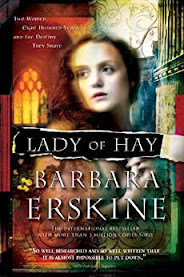 LADY OF HAY. Over the years I have come across many time travel novels with different ideas of what it might be like to visit the distant past. I love Barbara Erskine's, Lady of Hay in which time travel is effected by means of hypnotic regression, and the main character relives her previous life. This book was first published in 1985. In the main character's previous life she lived in 12th century England. Her life is grim and the novel is very dark. It's on my list of books to reread, someday. 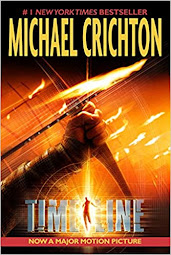 TIMELINE In Michael Crichton's Timeline, published in 1999, a group of students travel back to 14th century France via a method described as Quantum Technology. In this interpretation the travelers are able to fully interact with the past. With the use of communication devices they can speak the ancient French language. Without a portal though, they can become stuck in the past. I though it was a very inventive story. Travelers to the past were able to influence events of the time.

Other time travel stories use machines to facilitate their travels. Famously, the show Dr. Who uses a British telephone box and in the movies Back to the Future, a car is the vehicle of choice. The recently cancelled, but brilliant show, Timeless, had a spaceship like pod that carried the characters to a programmable past or future. Each time they returned the world they left was changed by their or other travelers influence on the past. I scary idea. 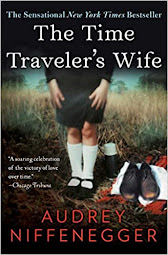 THE TIME TRAVELERS WIFE. In the Time Traveler's Wife by Audry Niffenegger, which was a very interesting, but ultimately sad take on travel, it's a genetic disorder that causes the 'traveler' to move erratically though the period of his own life. The travels are unplanned and unpreventable. I found this a very unique method of travel but it's also very limiting in its timeline. Still a very good read. This was also made into a movie if you'd rather watch it than read it.

OUTLANDER. Probably the most common method of time travel is the tried and true portal. Most people are aware of Diane Gabaldon's Outlander Series. Her heroine passes into the past in a ring of standing stones in Scotland. She is fully immersed in the world but doesn't seem to have an impact on the future. Claire is also able to travel back to her own time and does so for a great length of time before going back to the past to stay. Further into the series, more of these place portals are found. I've watched a few of the TV show seasons and I must say they did a bang on job of it. 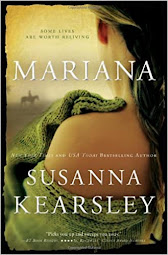 MARIANA. Another author who employs the place portal is Susanna Kearsley. She has written many time travel books and I love them all. Each one is a history lesson in and of itself. Of course the romance is also good. The settings and time frame vary from England, Scotland and France through various ages. I'd be hard pressed to pick a favorite. The Rose Garden and The Winter Sea are at the top.
Over the next few months I hope to have a series of guest authors who write their own version of time travel to stop by and tell us about their writing and what they think time travel would be like. Whether it be a head trauma, a device, a land portal or some as yet unknown method, we'll bring you all the new and upcoming time travel books.
If you have a favorite time travel book, leave a comment and tell us what it is. If I can  I'll add it to the post.