The Angel of Bishopsgate by Eloise Rueben 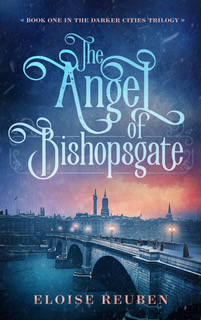 The Angel of Bishopsgate by Eliose Rueben
Published: February 2019
Publisher: Sharpening the Quill
Genre: Historical Fiction, Historical Thriller
Pages: 356 paperback
Available: ebook, paperback
Reviewers Note: I was given a free copy of this book in exchange for an honest review.

Eloise is an Australian living in the United States with her husband, young daughter and 3 mischievous puppies. As a lover of old cities and all things travel, she writes historical thrillers bursting with adventure, suspense and plenty of heart.
Eloise listens to (probably too many) true-crime podcasts, is addicted to research, cobblestones, thunderstorms, all the foods and every sunset.

A terrifying villain. A young woman desperate for answers. Danger and intrigue in Victorian London.
In 1848, Tessie and Finn struggle each day and dream of one day starting a life far away in the New World.
But when Tessie is attacked by an underworld figure known only as the Angel of Bishopsgate, her fight for survival has only just begun.
Separated from her beloved Finn, and oblivious to why the Angel wants her dead, her only clue points home to Dublin, and a life she thought would never find her.
Battling her way from the notorious Old Nichol slums, and reaching for the sparkling upper classes, how will Tessie survive this game of cat-and-mouse with the city's most notorious villain?

The plot in brief: (no spoilers) Tessie O'Shea is a young Irish woman living in the slums of London with her husband Finn. Tessie's world comes undone when she is threatened by the Angel of Bishopsgate, a sort of local crime boss. After an attack she is separated from her husband and forced to return to her past for answers.
The characters: I enjoyed the characters in this story, especially Tessie and her husband Finn. The author gives us a pretty good sense of who they are. There is nothing really original about them, but they are likable and easy to cheer on. The 'bad guy' is also pretty predictable as are his minions. The one character that stood out to me as really unusual was the young Haitian girl, Madochee. I thought she was inventive and a great side kick. I also liked Aileen. Tough as nails, but with a soft spot hidden deep within her. I liked the image of her weilding a hatchet in a bar fight!
The history: The book begins in 1848. Queen Victoria had been on the throne for a little less than ten years. London had serious slum issues and the plight of the poor was desperate. The Old Nichol was regarded as the worst of the worst of London slums. The author does a good job of describing life in the period when many people survived on a daily wage of very little.    I always enjoying reading about the lives of the 'little people'.
The inclusion of London/Dublin crime syndicates is a great bit of Victorian history. Most large Irish/British cities were over run with crime gangs. London had an all female gang called the Forty Elephants and Birmingham had the Peaky Blinders, now the subject of a BBC television show. The author was able to do something I think shows that her historical fiction is intriguing, I looked up London and it's gangs to read more about it.
The Writing:  I have to admit that as much as I enjoyed the story and the characters, I did not enjoy the writing. I found it melodramatic and overwrought. There were  many awkward and repetitive phrases.
On one page, Tessie felt 'something rumbling in her spine'.  Three sentences later, 'questions danced along her spine' and a few sentences later 'something rumbled up inside her'. Okay, I get it, shes scared, give her spine a rest.
Overall: I enjoyed the story, especially when the action moves to Dublin. I thought the plot was interesting and there were some unique characters which captured my attention. I also found the setting of the story to be of great interest. I think a good editor could improve the writing.
Recommendation: I would recommend this book to readers who enjoy historical fiction set during the Victorian era.
I give this book 3 1/2 stars: ⭐⭐⭐1/2