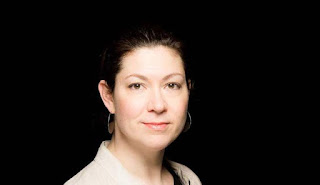 Book Blurb: From Penguin Random House comes debut author and US Navy veteran Elizabeth Lewes' gripping thriller. Expertly crafted, LITTLE FALLS (8/11/20), is a heart pounding story of mother and daughter and their fight against small-town evil. Because of your interest in murder mysteries, we think that the readers of The Family Connection/ The Book Delight will be interested in this engaging mystery:
Sergeant Camille Waresch did everything she could to forget Iraq. She went home to Eastern Washington and got a quiet job. She connected with her daughter, Sophie, whom she had left as a baby. She got sober. But the ghosts of her past were never far behind.
While conducting a routine property tax inspection on an isolated ranch, Camille discovers a tortured corpse hanging in a dilapidated outbuilding. In a flash, her combat-related PTSD resurges — and in her dreams, the victim merges with a young soldier whose eerily similar death still haunts her. The case hits home when Sophie reveals that the victim was her ex-boyfriend — and as Camille investigates, she uncovers a tangled trail that leads to his jealous younger brother and her own daughter, wild, defiant, and ensnared.
The closer Camille gets to the truth, the closer she is driven to the edge. And when Sophie disappears, Camille's hunt for justice becomes a hunt for her child.

Reviewers Note: I was given a free copy of this book in exchange for an honest review.
The Plot in brief: Barely keeping her life together, Camille Waresch is a messed up lady, living in a tiny town with wide open spaces; she needs them. A vet with unresolved issues from her time in Iraq, she stumbles on the body of a murder victim, releasing her pent up demons. Haunted by visions of the past, Camille tries to solve two murders while keeping her rebellious daughter out of trouble.
The Characters: Lewes does a fantastic job of bringing Camille to life, warts and all. For all her flaws, especially her lack of motherly skills, she remains a sympathetic character. She's rough and tough and can play hardball with the best of them. But, she's fiercely loyal and despite being unable to show it, she loves her pain in the ass daughter, Sophie.  Yes, Sophie is a mess, and we'd all hate to be her mother, but is she really to blame for her actions? We only see Camille's side of the story. I found Sophie to be a sad girl who got shafted in the parental department. Does she make poor choices, sure, but I'm not holding that against her. The rest of the Little Falls crew is a great mix of cops. suspects, nefarious creatures and ordinary people trying to get through the day.
The Murder Mystery: Despite a few suspend all belief moments and plot lines, I found this story highly engaging; it kept me turning the page. The action takes place in a relatively short period of time and there is action on almost every page. The resolution was satisfying while leaving the door open for a sequel.
The Writing: Told in first person, the story is narrated by Camille.  This point of view brings an intensity to the story with a sharp focus on Camille and her PTSD. The writing was crisp and to the point without a surplus of words. It worked well for the story.
Overall: I really enjoyed Little Falls. I loved the female protagonist/flawed heroine plot. The mystery thriller punched all the right buttons with a ending that resolved enough of the story to make me happy, but hungry for just a little bit more.
Little Falls earned a Readers Choice award!

Recommendations: I recommend this novel to anyone who enjoys murder mysteries with a gritty setting, police procedurals and a strong female main character.
Thank you, Mindbuck Media and Elizabeth Lewes for the opportunity to read and review this novel.