A Saint and a Sinner: The Rise and Fall of a Beloved Catholic Priest by Stephen H. Donnelly with Diane O'Bryan 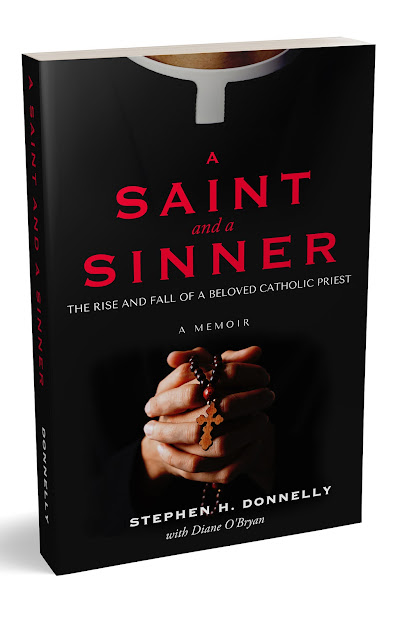 Today's book takes a step away from historical fiction and I'll review a memoir, something I rarely read. The subject is Stephen Donnelly, a former Catholic priest. As a practicing Catholic, I found this intriguing, I hope you do to.
A Saint and a Sinner; The Rise and Fall of a Beloved Catholic Priest
Author: Stephen Donnelly with Diane O'Bryan
Published: Sepember 2020
Publisher: Self-published
Genre: Memoir
Pages: 372
Available: paperback, ebook
A Saint and a Sinner is the life story, the good, the bad and the ugly, of former Catholic priest, Stephen H. Donnelly.  Stephen leads us through his memories of his formative years, growing up on Long Island, the son of a hard working, hard drinking father and a doting mother. At the age of 36, unmarried and with a recreational cocaine habit, Donnelly took the plunge and began training for the priesthood. Ordained at 42, Stephen embarked on a twenty year journey of self discovery. In that time he battled and conquered his addictions, struggled with his vows of celibacy and fought the demons that resided in his soul.
Having attended a Catholic University with a contingent of seminary students, I know that celibacy is a difficult vow to maintain and a real stumbling block to a vocational commitment. Donnelly  breaks his vow of celibacy in rather spectacular fashion and seems to implicate his fellow priests in this action. His book cracks open the rectory door and gives the reader a peek inside the priesthood and reveals the struggles, hardship, loneliness and self doubt that plague the men who serve a demanding church. To ease his pain and doubts, Donnelly self medicates with drugs and alcohol, living a life of duality; one a caring shepherd, leading his flock, a well loved and respected pillar of local life. His alter ego is a drug and alcohol abusing liar and thief involved in a long term relationship, well outside the bound of his vows. He lies to his fellow priests, he lies to his family, he lies to himself and he lies to God.
In plain language, Donnelly lays out his internal struggles with the poor choices he makes in his life. He is upfront about the fact that he is, indeed a sinner. Conversely, he does a lot of good in his community. As a recovered alcoholic he is instrumental in assisting those who also struggle. He seems to glory in the fact that he has made a huge impact in people's lives. Their praise is his new drug. To me, it seems as if he wears his vestments like a superhero wears his cape. Father Donnelly to the rescue.
Because this is a memoir, we have only Donnelly's version of the story. I'd be interested in hearing a more rounded account of his life. By his account he seems to have been beloved by his parishioners, but was this because they only saw his priestly persona? Only they can answer that question. His co-writer Diane O'Bryan speaks to his compassionate and caring nature. And it is clear from his book, and his many humble brags, that he was well regarded by his community, including politicians, celebrities and wealthy parishioners. Its hard to fool that many people all of the time, so I'll take his word on it.
Was he a sinner, absolutely. Is he a saint. I think the jury's out on that one.
A Saint and a Sinner is a fascinating look at the self-destructing life of a man who wants what he cannot have. He's a good man, battling with and often losing to his inner demons. I found his personal struggle with alcohol and drug to be enlightening. For those who have never fallen into a spiral of abuse it easy to dismiss the problem as nothing more than lack of will power and see it as a mark of weakness rather than what it is, an illness. That Stephen overcame his addictions and talked openly about it in an effort to help others speaks of his selflessness. The internal struggles of the Catholic Church, wracked by scandal and controversy, is also an important part of the story, especially as viewed by those on the inside. All in all, a satisfying, thought provoking book that gives the reader something to chew on well after the last page is turned.
I want to thank Diane O'Bryan and Stephen Donnelly for allowing me to read and review this book. I would definitely recommend it to readers who enjoy powerful personal memoirs and stories of redemption. I think that people of the Catholic faith will find this book a fascinating look inside the church, although they may see their parish priest in a new light once they finish.