Polyxena: A Story of Troy by H. Allenger 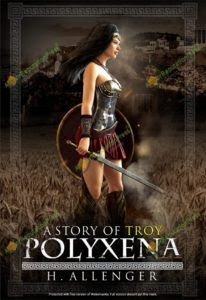 Polyxena: A Story of Troy by H. Allenger

Reviewers Note: I was given a free copy of this book in exchange for an honest review.
Author info: Follow H. Allenger on Facebook and Twitter

Author's blurb: After Polyxena, daughter of King Priam of Troy, is chosen as Neoptolemus's love interest, she embarks on a journey of self-discovery that leads to a surprising conclusion about her destiny.

Troy has just fallen, leaving the city in ruins and at the mercy of the Greeks. Neoptolemus has claimed the daughter of the now-deceased King Priam of Troy as his love prize. After she rejects his advances, he angrily contrives a story that dooms the ill-fated Polyxena. She knows what she must do to survive, but unfortunately, she cannot change her destiny.

Polyxena is mortified that Neoptolemus has fallen in love with her, for this means she must die at the commemoration rites for his father. As Polyxena prepares for the inevitable, she reflects over the past year, relating her thoughts to Aphrodite, the goddess she believes is responsible for orchestrating the events that have beleaguered her. As she tries to make sense of it all, Polyxena converses with all the well-known personages associated with the Trojan myth-Achilles, Agamemnon, Cassandra, Helen, and many others-while seeking solace in the hope that her existence has not been futile.

In this moving story of forbidden love, a young woman unwittingly becomes intertwined in the romantic legacy surrounding Troy, embarking on a journey of self-discovery that leads her to a surprising conclusion about the life she has lived.

The Plot in Brief: Polyxena was the daughter of King Priam of Troy, sister to Paris and Hector and the lover of Achilles. This is the imagined story of her brief life. She is sent on a mission to the Amazons to entreat them to enter the war against the Greeks. She has many adventures along the way and learns about life and love. But on her return to Troy the Greeks remain, her town besieged. All the greats from the Greek myths are here: Helen of Troy, Cassandra the seer who no one believes, Hector, Agamemnon, and Odysseus. After the fall of Troy, Polyxena is in the hands of Neoptolemus, son of Achilles. His actions determine her fate.

The Characters: The author does a marvelous job of bring these ancient mythological figures to life. They are fully fleshed out humans with believable emotions and motives. Polyxena is a girl on the cusp of womanhood when her father sends her on a diplomatic mission to save Troy. We watch as she grows in confidence and ability. She is smart, fearless and wise beyond her years. She embraces life, go and bad as it comes. All the main characters are given a similar treatment and it feels as if they were real people, not just dry dusty myths. I really liked the handling of the relationship between Polyxena and the Amazon warrior Antiope. And although her relationship with Achilles was brief, it was well developed. The character Neoptolemus seemed out of place in this narrative, like a spoiled child among the grownups. Other than that, no complaints.

The History:  Because the Trojan War is just a myth, this cannot technically be called historical fiction but it certainly reads like it. We get a good feel for life in Ancient Greece and its culture and religion. I loved the Amazons and the description of their city and lifestyle. Although most readers will be familiar with the story of the Trojan Horse, it is brought to life here and seems credible and realistic. I admit to heading to Google Maps to try to trace Polyxena's journey to the Amazon lands.

The Writing: The story is told in first person, narrated by Polyxena. The writing is lush and highly descriptive. We gets lots of details which I personally love. The dialogue is fairly formal but on rare occasion it slips into a more modern tone, which sounded off. The pace is rather sedate for the short time period covered. I did feel at times it was too slow and that the book could have been a bit shorter.

Overall: I really enjoyed this book. I loved the mythology and how the writer brought the characters to life. I thought the story as told by Polyxena was a great way to tell the story of Troy and the Trojan War. The author clearly knows his Greek mythology and despite being fiction, it felt authentic. Despite knowing the story of Troy and the ending of Polyxena's story I felt like I was reading it for the first time. This is not a book you can rush through, so plan on spending sometime reading it.

Recommendation: Lovers of Greek Mythology will enjoy this book. Readers of historical fiction will also appreciate the setting and story.