Crimes of the Levee by John Sturgeon 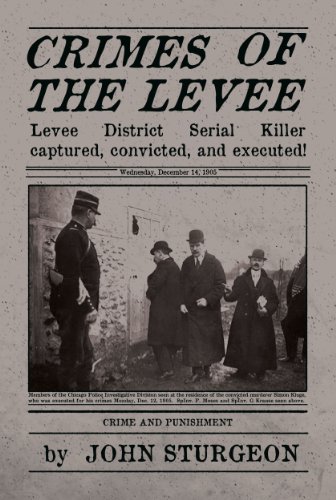 Crimes of the Levee by John Sturgeon
Published: 2013
Publisher: Black Rose Writing
Genre: Historical Fiction, Historical Crime Fiction, Chicago
pages: 252
Series; Yes, this book one of a three part series
Available: ebook, paperback Amazon
Sex: 💗 nothing graphic, some of the characters are prostitutes/brothel owners
Violence:  😨 yes, nothing too graphic, but does have multiple murders/beatings
Reviewers note: I downloaded this book from Amazon. I was not asked to review this book. This review is my honest opinion.
Author bio: John Sturgeon is the author of three books in the Levee District series featuring Detective Patrick Moses. John reads a lot an is an avid golfer (mediocre). He is currently working on a novel about the admission into Heaven (or Hell). John lives in Wheaton, Illinois with Mary, his wife of 38 years. "The Murder of Fatty Fuller" is his first stand alone novel.
Authors blurb: It is 1905, and Chicago is an open town. The most accessible part of town is the Levee District.  It is an area of the city that's hard to tell the crooks from the cops. There are brothels, madams, opium dens, gambling joints and plenty of alcohol, but it all comes at a price in the Levee, and the two Ward Aldermen get their share of every vice's dollar. With the hanging of serial killer, Simon Kluge, police Detective Patrick Moses is suddenly without a case. Before Moses can relax, he is approached by an aging retail mogul who asks him to investigate the mysterious shooting of his son.
As Moses gets deeper into both cases, he realizes that in the Levee there are a lot of people who don't want the two cases solved, including the police and the Ward Aldermen.
Plot in brief without spoilers:  In 1905 the Levee district of Chicago is a dark dank place brimming with seedy bars and brothels. Detective Patrick Moses and his partner Gunther have solved the case of a serial killer who hanging they witness in the opening pages of the book. Their next case involves the search for a young woman believed to be kidnapped into white slavery as a prostitute. Patrick is also hired by a wealthy citizen to help solve a murder.
The Characters: Patrick Moses lives in dark world inhabited by criminals, shady politicians and mob bosses. Everyone is either on the take or making  payments. Opium and cocaine are available to those who can pay. Prostitution is rampant. Alcohol seems to be consumed by the bucketful. Patrick, abandoned by his parents, raised in an Orphanage, lost his wife and children in a fire. How this man rolls out of bed everyday is beyond me. He's smart and dogged. He's honest on his own terms and loyal to his friends. I found him believable and intriguing. I enjoyed all the characters in the book, even the baddies were well drawn.
The History: I loved getting to see this gritty, dirty side of Chicago. The town was a rip roaring place where anything could be had for a price. From glittering clubs to the seediest dive Sturgeon takes us on a whirlwind tour of the tour. I admit I felt like taking a shower afterwards. One thing that tells me I'm reading great historical fiction is the need to look up characters and places to read more about them. I had to stop mid-book to do some research on google. The author does a fantastic job of weaving real events into his narrative and using some famous 'crimes' as part of the plot. This made the book even more enjoyable for me. See this article on Chicago's Red Light District, which also include a map of the district.
The Writing: The story is told in first person by Patrick Moses. The reader is in his head the entire time which gave us a close up of his thoughts and feelings. The pace is fast and the story zips along. I didn't think there were any slow spots or parts where the story sagged. There were some typos but there were not enough to spoil my read.
Overall: This was a fast entertaining read. I learned some cool stuff about Chicago and got a taste for early 20th century police work. I look forward to reading the other books in the series in hopes that Detective Patrick Moses finds some happiness, poor man.
Recommendations: I recommend this book to readers who enjoy historical police procedural stories, have an interest in Chicago history, or just generally like mystery thriller stories.
I rate this book 5 stars ⭐⭐⭐⭐⭐