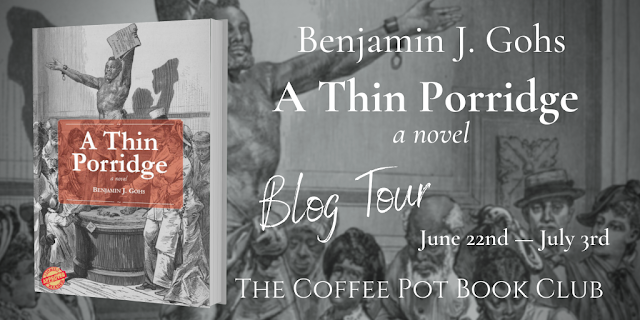 I agreed to read and review this book only days before the protest marches kicked off in a angry reply to the killing of George Floyd. The timing was eerie as the United States convulsed in reaction to years of pent up anger and despair at the racism embedded in our society.
Official blurb: When 19-year-old Abeona Browne's renowned abolitionist father Jon Browne dies in summer of 1860, devastating family secrets are revealed, and her life of privilege and naiveté in Southern Michigan becomes a frantic transatlantic search for answers—and someone she didn't even know existed.
Still in mourning, Abeona sneaks aboard the ship carrying her father’s attorney Terrence Swifte and his assistant Djimon—a young man with his own secrets—on a quest to Africa to fulfil a dying wish.
Along the journey, Abeona learns of her father’s tragic and terrible past through a collection of letters intended for someone he lost long ago.
Passage to the Dark Continent is fraught with wild beasts, raging storms, illness, and the bounty hunters who know Jon Browne’s diaries are filled with damning secrets which threaten the very anti-slavery movement he helped to build.
Can Abeona overcome antebellum attitudes and triumph over her own fears to right the wrongs in her famous family’s sordid past?
So named for an African proverb, A Thin Porridge is a Homeric tale of second chances, forgiveness, and adventure that whisks readers from the filth of tweendecks, to the treachery of Cameroons Town, across the beauty of Table Bay, and deep into the heart of the fynbos—where Boer miners continue the outlawed scourge of slavery.
Author Bio: Benjamin J. Gohs is a longtime award-winning news editor whose investigative journalism has included stories of murder, sex-crime, historical discovery, corruption, and clerical misconduct.
Benjamin now divides his time between writing literary thrillers and managing the community newspaper he co-founded in 2009.
Connect with Benjamin: Website • Twitter • Goodreads.
My Review of A Thin Porridge 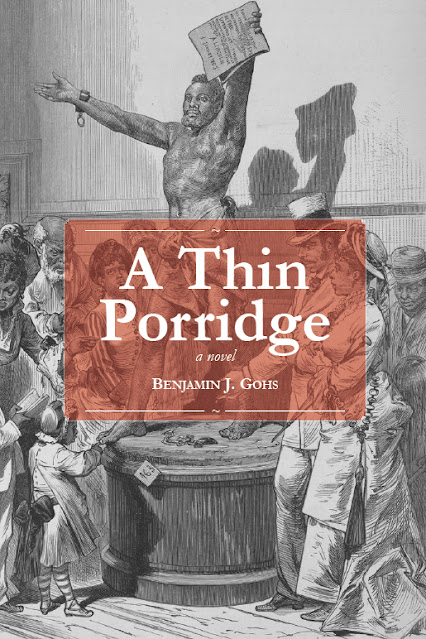 A Thin Porridge by Benjamin J. Gohs
Published: 15 June 2020
Publisher: Self-Published
Genre: Historical Fiction, Literary Fiction, African Fiction
Pages: 369
Available: Amazon US, Amazon UK, Amazon CA, Barnes &Noble in ebook/paperback
Sex: 💗 mild sexual behavior
Violence: 😨 Some, nothing too graphic
Reviewers Note: I was given a copy of this book in exchange for an honest review.
Blot in Brief:  In 1860 a  free young woman of color loses her father, her hero. His loss sets her adrift.  But his will reveals startling details about his life, that make her question who he really was and sends her on quest to Africa. She goes seeking answers about her father and finds herself along the way.
The Characters: 19 year old Abeona Browne, cossetted and sheltered from the worst of 1860s racism is naive beyond her years and in ways that I would not have thought possible for a free black woman in 19th century America. Protecting her from herself and others are a young free black man, Djimon and her father's lawyer, brandy swilling Englishman Mr. Swifte. Abeona survives many trials, most her own fault, on a trans-Atlantic trip to the dark continent. Working against her is a mysterious man by the awesome name of Dubious Grimmis, is he friend or is he foe?
I didn't like Abeona for most of the book. She was petulant and peevish and many of her actions were counterproductive and put others in danger. Slowly she grew on me but it wasn't until she put her red boot on the rail and demanded a brandy, did I fall for her. I loved Mr.Swifte, and Djimon and his country people sayings, they were the perfect foil for Abeona.
In the second half of the book, Africa steals the show. As the trio leave their ship behind, with its Champagne and fine dining and elegantly appointed room, the they makes due with dried staples and a wagon. In the port city of Cameroon Towns, Abeona comes face to face with slavery at its source.  As they head into the bush, relying on native guides, Abeona struggles with hardship and danger. In a world full of lions, hyenas and monsters of the human kind, Abeona sheds her pampered persona and learns that if she is to survive she must look inward to save herself and those she loves.
The History: I love it when a book takes me on a journey back in time and gives me the grand tour. I can taste, smell and feel the fabric of the past. Gohs has done an amazing job of creating a rich tapestry of settings. From 1860s Michigan, the juxtaposition of tween decks and first class accommodation of on the ship to Africa, land of mystery, misery, excitement and danger.
I think this is a time period about which not enough is written, especially from a Black perspective. Yes, I know there are a million Civil War books around, but not about so many about the experiences of daily life.  Although classified as the late modern era, it feels anything but and its worlds apart from our lives, especially on a technological level. But there are enough similarities, especially in race relations that make the reader think, things haven't changed enough.
The Writing: The story is told in third person, past tense. The writing is densely packed with descriptive prose. I found it took me a while to get into the rhythm of this book. It's not something you can skim through quickly, I had to slow myself down in order to appreciate the narrative language. The pace is pretty fast, there is a lot of action crammed into the tale which speeds the reader along.
One element of his writing that I did not like was the dropping of words. Ex. Fat man shouted more unintelligible words while skinny man lifted..... The author employs this thing throughout the book. It's Girl did this, Man did that, Wagon did this, on and on. I found it mildly irritating.
Overall: The author almost lost me in the first few pages, but once I got into the heart of the story I was hooked. I was glad I stayed the course. The book was a great read and worth taking the time to absorb the prose. I enjoyed the characters and I especially enjoyed the history. I felt like I'd gone on a bad safari through Africa without my bug spray. You know, one of those horrible vacations that you'll talk about for the rest of your life.
My biggest complaint was the  word dropping/omitting writing style.
Recommendation: If you love good history and a great coming of age story, I think you'll appreciate this novel. I would also recommend this to readers interested in African and African American History.
My Rating: I give this book 4 1/2 stars.
Labels: 4 1/2 Stars Coffee Pot Book Club Historical Fiction History