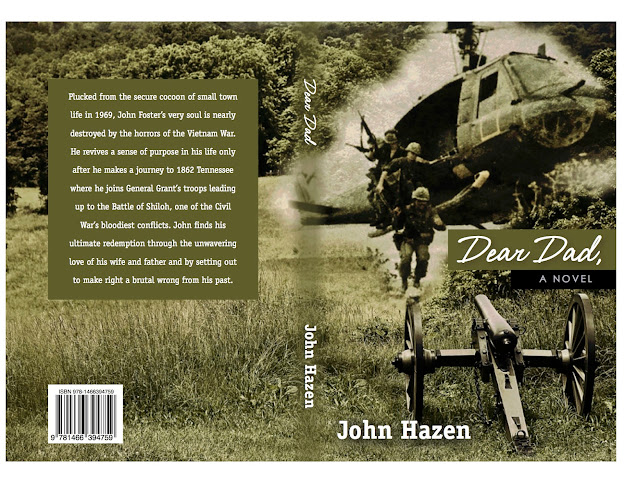 Dear Dad; A Novel by John Hazen
Published: 2012
Publisher: self-published
Genre: Historical Fiction, Time Travel, Military History
Pages: 293
Available: Amazon paperback and Kindle
Sex: 💗 None
Violence: 😨 Yes. It's a war book!
Reviewers Note: I was given a free copy of this book in exchange for an honest review.
Author Bio: John Hazen came to writing novels relatively late in life, but once he started he hasn't looked back. Degrees from Rutgers, The New School and New York and NYU buttress a lifelong passion for learning and a love of history. Inspired by Lynn, his wife of over thirty years, he pursued the dream of becoming an established author and is now working on his fifth book. John and Lynn love to travel, and the experiences of those travels find their way into his writing. John's reading tastes are eclectic, ranging from histories to classic novels to an occasional piece of modern trash. His absolute "must reads" are Harper Lee's To Kill a Mockingbird, J.K. Rowling's Harry Potter series and Doris Kearns Goodwin's No Ordinary Time.
Author Blurb: John Foster is a product of the ‘60s. The question is: which ‘60s? Leading a sheltered, cozy life growing up in the small town of Fairbrook, Massachusetts, John is plucked from his secure cocoon in 1969 and dropped into the maelstrom of the Vietnam War. As he witnesses and participates in the horrors of war, John literally feels his very soul, as well his will to live, eroding away. His redemption only comes after he is seriously injured and awakens to find himself in 1862 Tennessee where he joins General Grant’s troops in the days leading up to the Battle of Shiloh, one of the Civil War’s bloodiest conflicts. As his father, a decorated World War II veteran, had always told him, he discovers that it is possible to be part of something larger than himself. His humanity is ultimate restored after he embarks on a dangerous mission to make right a brutal wrong from his past.
The Plot In Brief: No spoilers! John Foster is a young man who grew up in a small town in Massachusetts. He admits he's led a sheltered existence, he's never met a person of color in his entire life. After an attempt at college he drops out and joins the army. In Vietnam he comes to question the reasons for the war and his part in it. A blast goes off and John awakes in a medical tent in rural Tennessee. He finds himself in the midst of the American Civil War. John doesn't know if he's alive or dead, only that there is work to do, saving the lives of Union Soldiers preparing for the Battle of Shiloh.
The Characters: John Foster strikes me as the quintessential all-American White Boy. He's decent, smart, nice to his Grandma and loves his parents and loves his country. I wasn't sure what to make of him until the story built a little steam up and John finds himself out of his element, the protective shelter of small America. His interactions with those who cross his path in the army show him to be a honest guy who accepts people for who they are not what they are. I was glad to see his character develop over time as his life is impacted by the Vietnam War and the atrocities that soldiers were exposed to and participated in. I enjoyed his friends and army buddies and his father. My only complaint might be the girlfriend and their very rushed relationship, but heck if I can go along with the time travel I guess I can accept love at first reawakening.
The History: I have to admit it was the potential history that got me interested in this book. My son is at Fort Hood, and last summer I visited the Shiloh Battleground. Both are featured in this story, so I felt an immediate connection. I really enjoyed the description of life in a small New England town in the 1960s. In a way it portrayed a way of life long gone, for better or worse. That world was shattered by the Vietnam War and the Civil Rights movement. I thought the portrayal of life in Vietnam for the American Soldier felt authentic and captured the futility of the conflict. I wasn't sure how the time travel would work and it seemed out of place in the story, until it happened. The Civil War segment was my favorite part of the book. Having been to Pittsburg Landing and stood where General Grant stood, it made it all seem real. I thought the character of Doc Whittley and Jon Harris were marvelous and the description of medical care amply graphic.
The Writing: Told in first person the book if pretty fast passed. It is well edited with strong narrative voice. Well done!
Overall: I wasn't sure if I was going to like this book but I really enjoyed it. The story sound incongruous but the plot works and works well. The overall arc of the story is positive and John comes out the other end a better man, slightly scarred but better for his experiences.
Recommendations: I would recommend this book to lovers of military history, both current and Civil War era. The time travel element is really just a vehicle to move the action into the past, but I see no reason why time travel enthusiasts would not like this well written, engaging story.