Rags of Time by Michael Ward 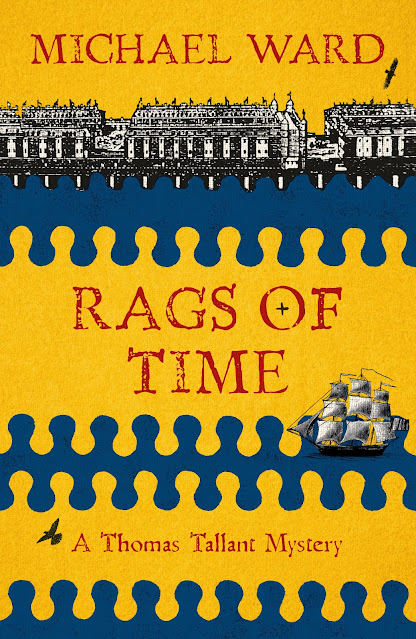 Sex: ❤ none
Violence: 😨 yes, its a murder mystery + incidental violence

Reviewers Note: I was given a free copy of this book in exchange for an honest review. Click on the book cover above or the Amazon button below for more information on this book.

Authors Bio: Writing has been central to Mike Ward’s professional life. On graduating from university he became a journalist, working in newspapers and for the BBC. He then went into journalism education, teaching and researching journalism practice before becoming head of the UK’s prestigious Journalism School at UCLan. For the last eight years he has run his own content creation company.

‘Rags of Time’ is Mike’s debut novel. Its sequel is due to be published late in 2020.

The Plot in Brief: (no spoilers) In 1639, Thomas, the son of wealthy spice merchant Sir Ralph and Lady Beatrix Tallant, returns home from a lengthy voyage to India. The city he returns to is changing. London is  awash in violence and radical ideology has reached a boiling point. When two merchants die under unusual circumstances, suspicion falls on Thomas. Determined to prove his innocence, Thomas must decide who is friend and who is foe.

The Characters: Thomas Tallant and his cohorts are a well drawn and highly believable collection of dandies, oddballs and misfits. Thomas is engaging and we quickly get on his side and cheer for him. He develops a significant relationship with his neighbor, Elizabeth, a progressive independent young woman, the sort of which, I would like to believe actually existed in the real world.  Thomas parent's and siblings are fully fleshed out and are presented as loving and kind, his mother especially. All the characters feel real.

What I really enjoyed and appreciated about the folks who inhabited the pages of this book was how their nature and past actions slowly unfold. They are not who we think they are. We come to understand their motivations, fears and desires as the layers of past actions are laid bare.

The History: ⭐⭐⭐⭐⭐ The 17th century was an amazing time in England. So much happened politically, economically and culturally. The religious divisions which led to the overthrown of a self-righteous king, firm in his belief of his divine right to rule, makes for a fantastic backdrop to literature. The author clearly knows his history and the book is chock-a-block with historical people and events. From the spice trade, the tulip debacle, the crisis of parliament, the rise of science and the scientific method, all is crammed into the story.

This is one of my favorite time periods and I really enjoyed the setting. I would love to have seen the inside of that house on London Bridge! 😉

The Writing: Told in 3rd person past tense, the writing is excellent as is the editing. Well paced, I found myself zipping through it. I didn't notice any slow spots which tend to make me set the book down and wander off for a cup of tea. It is wonderfully, but not overly descriptive. I felt fully immersed in 17th century London. Well done Michael Ward!

Overall: I found this book both engaging and highly enjoyable. The historical setting was perfect. My one complaint was with the mystery portion of the story. Potential spoiler alert! stop reading now! I never really felt that as the reader, I had a chance at figuring out the whodunit part. I had a vague sense of disappointment when the killer was revealed. Okay, all done. Mind you, it didn't ruin the story for me, just kinda ho hum, oh well. I was satisfied with the ending and I look forward to reading more about Thomas Tallant.