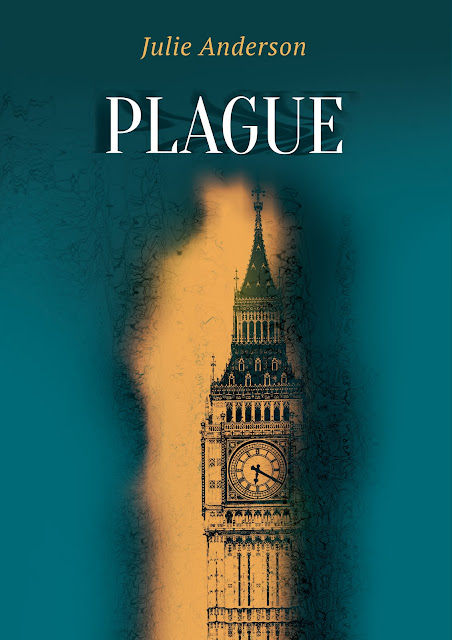 Reviewer's Note: I was given a free copy of this book in exchange for an honest review. Click on the book cover above or the Amazon button below for more information on this book.

Author bio: Julie Anderson was a Senior Civil Servant in Westminster and Whitehall for many years, including at the Office of the Deputy Prime Minister, the Inland Revenue and Treasury Solicitors. Earlier publications include historical adventure novels and short stories. She is Chair of Trustees of Clapham Writers, organizers of the Clapham Book Festival, and curates events across London.

Scroll down for Julie's social media and website links

Author's Blurb: There are many ways to die. Plague is only one.

Work on a London tube line is halted by the discovery of an ancient plague pit and in it, a very  recent corpse. A day later another body is found, also in a plague pit. This victim is linked to the Palace of Westminster, where rumours swirl around the Prime Minister and his rivals.

As the number of deaths climbs, the media stokes fear. Government assurances are disbelieved.  Everyone feels threatened. This has to be resolved and fast.

A disgraced civil servant and a policeman must find the answer before Westminster closes for  recess. Power, money and love curdle into a deadly brew that could bring down the Mother of Parliaments.

Time is running out. And it’s not clear what – or who – will survive.

Brief Plot: Detective Inspector Andrew Rowlands believes a serial killer may be stalking the streets of London and leaving his victims in highly unusual locations. When it appears the Palace of Westminster is linked, Civil servant Cassie Fortune is assigned to help assess the potential damage to the future Prime Minister's reputation. Together Andrew and Cassie struggle to uncover the killer. When the fact that a victim was found in a centuries-old plague pit hits the media, the public reacts with fear, further compounding the case.

Characters: I really enjoyed getting to know Cassie. She has a past, and enough flaws to be believable. D.I. Rowlands is a bit of a boy scout, but he's handsome and rock solid so I forgive him for that. Sparks fly when they are together. Super sexy and rich Lawrence Delahaye rounds out this trio of interesting engaging characters. There is a wide cast of suspicious ne'er-do-wells, who may or may not be the 'bad guy'. We get to know a bit about each of them as we draw closer to the killer's reveal.  The city of London, or rather, what's under the city of London could also be considered a character in this book. We get an up close look at the hidden world lurking beneath the city streets. Over its almost 2,000 year history, the city's infrastructure has grown and evolved, each layer built on the one prior. Underground there lies a maze of tunnels, sewers, rivers, bunkers and much more.

Writing: Told in 3rd person, past tense, the writing is fast paced and for the most part zips along. Being unfamiliar with the hierarchy of the British Government, I had to slow myself down and sort out who was who, but the author does a good job of explaining the different roles. The book is well edited, easy to read and the prose has a nice flow.

Overall: I found this book highly enjoyable. The setting was fantastic, especially for a history lover with a soft spot for all things English.  I really liked learning more about London, the environs of the British Government, and a bit about its key players. I also enjoyed the mini-history lesson on the city and strangely thought the trip through London's sewer system fascinating.
But this is a murder mystery so, I thought it was well plotted, the police actions to solve the case are believable and ring true. The criminal element is entirely too believable! It took a while before I guessed the killer, this did not take away from the suspense, instead it made all the more powerful.

Recommendation:  I would recommend this book to lovers of murder mysteries, police procedural, international settings (set in London) you will enjoy this book.