I am Cuba; Fidel Castro and the Cuban Revolution by Matthew Langdon Cost 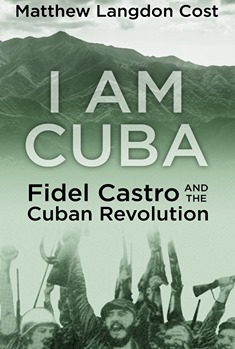 I am Cuba; Fidel Castro and the Cuban Revolution by Matthew Langdon Cost

Reviewers Note: I was given a free copy of this book in exchange for an honest review.

Author Bio: Matthew Langdon Cost has a published historical on Joshua Chamberlain and an upcoming historical on Fidel Castro, as well as a mystery trilogy set in Maine soon to follow. Over the years, Cost has owned a video store, a mystery bookstore, a gym, as well as taught history and coached just about every sport imaginable. He now lives in Brunswick, Maine, with his wife, Harper. There are four grown children; Brittany, Pearson, Miranda, and Ryan. A Chocolate Lab and a Bassett Hound round out the mix. He now spends his days at the computer writing.

The Plot in Brief: This is the story of the Cuban Revolution from it's shaky disorganized beginning to it's ultimate success in overthrowing the government of Fulgencio Batista. This book covers the time period of 1951-1959.

The History: ⭐⭐⭐⭐⭐Clearly the author has put an enormous amount of research into this book. The narrative is filled with dates and times, places, and more names than I can recall. Battles are described in great detail and the reader gets a great sense of what it was like to fight a guerrilla war against an American backed government with tanks and airplanes at their disposal. It's also amazing to see how close they (the rebels) came to losing on multiple occasions. On one level the book reads almost like a non-fiction blow by blow of the revolution. Some readers may love this deep dive into military maneuvers others may not. I admit my eyes glazed over in some parts and I skipped over some of the graphic blood shed.

The Writing: ⭐⭐⭐⭐The book is told from a 3rd person point of view, from multiple characters. The overall quality of the prose is pretty good, but I found it sometimes a bit uneven and overly wordy. Minor quibble: There are a lot of Spanish words and phrases thrown in and mixed with American slang and anachronisms. I sometimes wondered what language they were meant to be speaking.

Overall: I was surprised that in a book about Fidel Castro,  his is not the main voice of the story. The predominant voice is a character called Vicente Bolivar, the book begins and ends with him. And it is this character which utters the phrase, 'I am Cuba.' Vicente grows from a young man unsure of his place in Cuba to a hardened revolutionary soldier. This fictional character humanizes the face of the fighters and also allows us to sympathize with a group of people we would otherwise castigate as Marxists rebels, enemies of the American Government.

I was expecting a more Castro centered story, his view of the revolution, but the is narrative much broader and so his role in telling his own story is reduced to small bites. That being said, I did enjoy learning about the core group of revolutionaries like Che Guevara and Cecilia Sanchez, who may or may not have been Fidel's lover. I found the role of women in this revolution to be well, revolutionary. Women were respected leaders and commanders under Castro, who wisely used the talents of anyone willing to fight alongside him, irrespective of their sex.

Recommendation: Any one with a love of historical fiction, especially centered in New World, will enjoy this book on the Cuban Revolution.

My Ratings:
1 ⭐  Star: Not good at all, do not read!
2 ⭐⭐ Stars: Read only as a last resort, no other books available
3 ⭐⭐⭐Stars: Good, enjoyed it, will recommend with reservations
4 ⭐⭐⭐⭐Stars: Really good, read this book!
5 ⭐⭐⭐⭐⭐Stars: So good, I might read it again sometime! Highly recommend
Labels: 4 Stars Historical Fiction International Military