Victoria's War by Catherine A. Hamilton 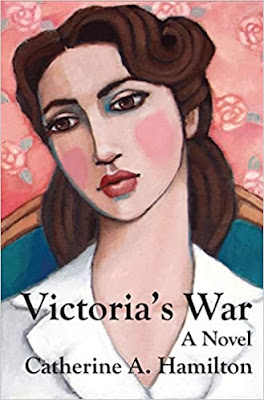 Sex: 💔rape scenes
Violence:😱lots of beatings, etc. but appropriate to the story

Reviewers Note: I was given a free copy of this book in exchange for an honest review.  Click on the cover or the amazon button at the bottom for more information.


Author Bio: Catherine A. Hamilton is a freelance writer of Polish descent whose articles and poems have appeared in magazines and newspapers including the Sarasota Herald-Tribune, the Oregonian, the Catholic Sentinel, the Dziennik Zwizkowy (the oldest Polish newspaper in America), and the Polish American Journal. She is the author of the chapter about Katherine Graczyk in Forgotten Survivors: Polish Christians Remember the Nazi Occupation, edited by Richard C. Lukas. Victoria's War, her first novel, will be published in 2020 by Plain View Press. She actively publishes and blogs at catherineahamilton.com. Hamilton lives in the Northwest with her husband.

The Plot in brief: (no spoilers) Victoria Darski is nineteen, about to go to University. Her life is upended with the Nazi occupation of Poland in 1939. Instead of sitting at at desk, she sit in front of a sewing machine making uniforms for German soldiers. But worse is yet to come. Victoria and her friends are arrested and sent to Berlin to be sold as slaves or work as prostitutes. Victoria is bought by a baker who has a deaf artistic daughter, Etta. Despite their differences, they forge a friendship and find a common cause, helping to feed the starving polish slave workers. To be caught means certain arrest or worse.

The Characters: Both Victoria and Etta come to life in the narrative of this book. Victoria, haunted by the death of her sister, fights to survive the soul destroying life of a slave worker. She is challenged by others to rise above her fears and help where she can, even if it means endangering her own life. Etta, a deaf but highly intelligent girl, finds herself on the wrong side of history. A 'defective' person, living through Adolph Hitler's purge. They grow together and despite the risks try to help where they can.

The History: The history in Victoria's War is exhaustively researched and chillingly compelling. Most people do not realize the damage inflicted on Poland during WWII. About 6 million Poles lost their lives during the dual invasions by Germany and Russia that cleaved their country in two. Most of the deaths were civilian casualties. The Germans viewed the Slavic people, regardless of religion, as racially inferior. Over 3 million people were shipped to Germany as slave laborers. The detailed description of these acts unfold on the pages of Victoria's War in graphic striking detail. As the survivors age and pass away, it's imperative that their stories are recorded and told. In light of the rise of holocaust deniers, these types of stories are vital to keep the truth alive. Hamilton does an outstanding job with what is a very painful subject to read.

The Writing: Told in third person through the view of both Victoria and Etta, the writing is crisp and well edited. The pace if fairly zippy in the beginning, it does slow down a bit middle and then picks up for a fast ending.

Overall: Is it weird to say I enjoyed this book? It was a very painful read. There were many times when the plot had me squirming in my chair as I grimaced through tough scenes of beatings, torture and death. But you know what, this kind of story ought to make you feel uncomfortable, you should gasp and cry over the fate of these characters. If you don't feel their anger, despair and fear then the author hasn't done her job or there is something wrong with you, reader. Hamilton does a great job of telling an authentic story, brimming with real emotions. I enjoyed it!

Recommendations: I recommend this book to anyone with an interest in general WWII history and those who have a special interest in the Polish history of the war. Readers who enjoy survivor stories and those that have a strong female lead character will also appreciate this novel.