Mud and Stars, Travels in Russia with Pushkin, Tolstoy and other Geniuses of the Golden Age by Sara Wheeler 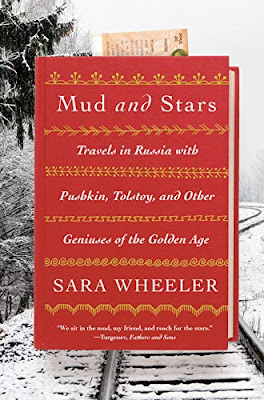 Reviewers Note: I checked this book out from the library!


The review of this book comes with several confessions; the first of which is, I put this book back on the library shelf after a cursory glance. It sounded boring. I have absolutely no interest in Russian Literature. I think I took a stab at Dr. Zhivago when I was in college, but that was it. It was my husband who picked up Mud and Stars, checked it out and read it. 'It's great', he said. Yawn. No thanks.

Then came the Covid 19 shutdown, our lives placed on indefinite hold. The library remains shuttered as I type this. Bored, I picked up the book and leafed through it. Lots of pictures of old bearded Russian men juxtaposed with pastelly houses that look like they belong in Bermuda not frigid Russia. Hum, still unsure, but what the heck. So, I gave it a go.

Yep, its good. I liked it. A lot. The book sucks you in as you delve through its multilayered chapters. On the surface the author takes the reader on a historical home tour of the giants of Russian literature. Each writer gets a brief overview of his plays, novels and or poetry and his private life including mistresses, madness,  fatal duels and chronic illnesses. Wheeler, over the course of what seems like several years, visits Russia and pays homage to its literary heroes. When not in country, she treats us to her attempts at cooking Russian cuisine and learning to speak the language, more entertaining that it sounds.

After a few chapters the Russian names began to run together in my head but I didn't really care. It was the journey, not the destination that I enjoyed. Confession number two: My favorite character was Oblomov, namesake of a novel called Oblomov by Goncharov, not that I intend to read it or anything. He reminds me of my current state of ennui. Envisioning myself in the train, staring out at the passing Russian landscape, helped pass a few listless hours during the 'new normal' that is my daily life during self-isolation.

From the outskirts of Moscow to ugly Sochi to furtherest Siberia, we are taken on a progress through today's Russia, mostly by train. We learn about lush farms, forested mountains, the largest lake in the entire world and the utter vastness of Siberia. Staying in homes with the average Russian, Wheeler brings us face to face with them, often teasing out their personal view of their homeland and their leaders past and present.

Wheeler is clearly no fan of Putin and the oligarchs who bleed the country of its riches, but then who is? That said, it's even more interesting to read how the Russian people view their own collective history and their take on the current social and economic state of their country.

Read this book for the travelogue and for the history, if you fall in love with the literature, even better. Confession number three: I did not fall in love.