The Pearl of York; Treason and Plot by Tony Morgan 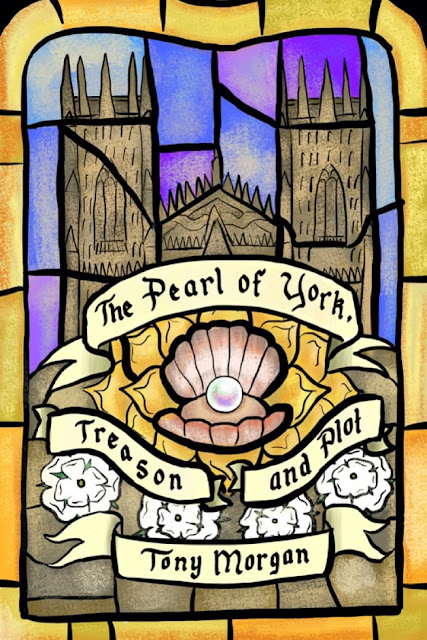 Sex: 💗 none
Violence: 😱 torture and death scenes, nothing too graphic

Reviewer's Note: I was given this book in exchange for an honest review. If you are interested in seeing this book on Amazon, click on the cover or button down below.


Author Bio from his Amazon Author page: Tony Morgan is a Welsh author living in Yorkshire in the UK, near to the birth place of Guy Fawkes. His books have been described as a perfect read for lovers of the works of C.J. Sansom and S. J. Parris and anyone interested in how historic events have shaped our own times.

Debut novel REMEMBER, REMEMBER THE 6TH OF NOVEMBER is a new look at the story of Guy Fawkes and the Gunpowder Plot.

The Plot in brief: The Pearl of York is the story of two of York, England's most famous residents, the notorious Guy Fawkes who is celebrated each year on Bonfire Night and Margaret Clitherow, a catholic martyr and saint. In the tale, Guy is a young impressionable protestant schoolboy on the brink of manhood. Margaret, the wife of a well-to-do butcher, is a follower of the Old Religion, a Catholic. Catholicism was illegal and anyone suspected of harboring priests or allowing mass to be said was subject to arrest and worse as Margaret comes to find. Young Guy and other Catholics  allies attempt to save Margaret from herself and prevent her death.

This is not the story of the Gunpowder Plot, but the tale of a young man who witnesses  a brave unyielding woman go to a gruesome death in an effort to save her family. This is more the story of that woman, St. Margaret and the world in which they lived.

The History: The author, Tony Morgan, has clearly done his homework and done it well. The story is well researched and based on contemporary documents, accounts and records. Morgan has also done an excellent job of describing daily life in the city of York.  One of the most difficult aspects of writing historical fiction is to fully immerse the reader in the past and I think this is accomplished here.

The Characters: Although both main characters, Margaret and Guy are well known for their part in the fabric of English history, not much is known about their early life and their motivations. A central question in each of their lives is why did they convert to Catholicism when it was much safer to remain in the religion of their parents. Morgan had to recreate the early life of Guy Fawkes and gives the reader a sense of what might have led him to conversion and the actions of his later years. Margaret Clitherow chose to die rather than make a plea. Why? Her inner thoughts remained her own. If anyone knew, it was not recorded. But the author provides a reasonable explanation for her choice. I found both Guy and Margaret to be well drawn, fully fleshed out and totally believable.

The Writing: The book is well written and well edited. There are no glaring typos or grammatical errors. The story is told in first person, Guy Fawkes is our narrator. The narrative is well paced and the book zips along. There is enough description to ensure the reader knows what and where but not too much to weigh the story down.

Overall: I really enjoyed this story. It's good to be reminded of the ugly side of Tudor history and that it's not all about Queen Elizabeth and her glittering court. And I believe it's important to remember that there was a time when we were not free to choose how or if to worship  and that at times to be a practicing Catholic or Protestant was to be outside the law. Despite knowing how things were going to end for both Margaret Clitherow and Guy Fawkes, this book is more about the journey than the outcome. It humanizes a man whose actions are now an excuse for revelry and fun, which I guess is a good thing.

Recommendation: I think anyone who loves good historical fiction will enjoy this book as much as I did.  Especially recommend to people who love the Tudor England as a backdrop to a story.

Special Note: Proceeds from books sold in 2020 will be donated to St. Leonard's Hospice in York.