Mudlark: In Search of London's Past Along the River Thames by Lara Maiklem 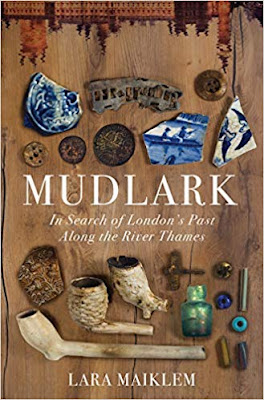 Reviewers Note: I checked this book out at my local library! I'm tempted to keep it. 😍 But I won't.


Author's Bio: Scraped from the internet: Maiklem was born in 1971 on a dairy farm in Surrey, 30 miles from Central London. Her father's family have been farmers for at least 400 years. Her mother's family are from London, until the early 20th century they worked as shipbuilders on the Thames and lived in the East End. She earned a degree in Sociology and Social Anthropology from Newcastle University in 1993. She lived in London for 25 years and now lives on the Kent coast with her partner and two children. She is licensed to mudlark on the River Thames by the Port of London Authority and has been searching the foreshore in her spare time for over 15 years.

What is a mudlark:  A Mudlark is a person who scavenges along the foreshore of rivers searching for debris. Mudlarks have existed in one form or another since humans began throwing or losing their stuff in rivers.

My Review: I first heard of the author Lara Maiklem via Twitter. Someone retweeted one of her tweets about her madlarking finds. Lara Maiklem mudlarks along the foreshore of the River Thames in search of historical artifacts. She posts about her finds on Facebook and Twitter. This led me to follow Maiklem on social media and watch her videos on Youtube. I was intrigued. (more on this later.) I did not realize she had written a book until I saw it in my library and immediately dropped the other books I was looking at and ran home to start reading.

I gotta tell you straight up, this book is amazing. I couldn't put it down. Lara Maiklem has written a love letter to the Thames, to London and to English history.  Starting at the tidal head of the Thames River in Teddington, Maiklem takes us on a seaward tour of the river, stopping at prime mudlarking sites, chapter by chapter. Now to some, this sounds like a coma-inducing bore, but it's not.

Maiklem has the rare talent of making the past come alive. The author describes in great detail the foreshore of the river and shares the history of the Thames from pre-Roman to modern times.Her love of the river is reflected in the pages as she details the changes wrought by man over the centuries as they forced, what was once a wide shallow river into an embankment-confided, channel-dredged super-highway to the sea.

The author shares not only her amazing finds: pottery shards, roman beads, coins of all ages, 17th century tobacco pipes, ceramic dolls, 600 year old leather shoes, and so much more, but she researches and tell us the history behind the object. We learn when it was made, where, how, and who might have used and lost it. Maiklem believes each item, whether a lowly button or a valuable roman artifact, has a story to tell about the human who once held then lost it.

Now, here is my one and only complaint about the book. THERE ARE NO PICTURES! I had to sit with my phone handy, ready to Google items that I just had to see a picture of. My favorite find was the Frozen Charlotte dolls. I loved the back story about the doll, and of course, I had to see an actual picture of one.

Recommendation: If you love history, especially British/English history you will love this book!

It's funny but when I first hear Mudlark, I fell in love with the word. As a writer you never know what will fire your imagination or spark and idea. I was determined from the start to write a book about  a Mudlark. The story has evolved and the first draft is well on its way. I'll post more as it goes along. But I have to thank Lara Maiklem, even if she never sees this, for inspiring the writer in me with a single tweet. Don't underestimate the power of social media!