Amanda Cadabra and The Hidey-Hole Truth by Holly Bell 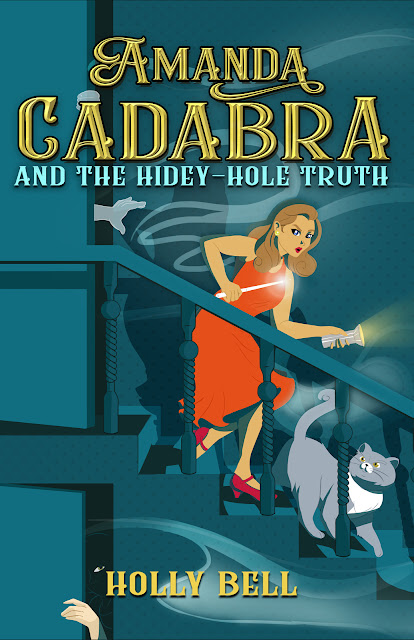 
Reviewers Note: I was given a free copy of this book in exchange for a fair and honest review.

The Plot: Orphaned by an unexplained accident, Amanda is raised by her eccentric grandparents in the lovely village of Sunken Madley. Amanda is from a family of witches and we follow her progress as she learns her craft. As a 'good witch' Amanda is instructed to keep her magic under-wraps and promises never to use it to harm a 'normal.' Alongside her lessons in magic, Amanda studies the craft of furniture restoration. While on a job in the ancient ghost filled Sunken Medley Manor, Amanda must put her magic to good use to solve the mystery of the Hidey-Holes.

Overall: British cozy paranormal mysteries are not my normal cup of tea. (see what I did there?) However, in a single day I received three separate requests to review books about witches. This seemed rather auspicious and I decided to review the trio of book together in a spellbindingly spectacular blog post. Sadly, of the three, one was so poorly written I lost consciousness half-way through and fearing some sort of black magic was at work, immediately deleted it from my kindle. The fate of the second book remains a mystery as it failed to materialize in my inbox. So that leaves me with one book. Amanda Cadabra by Holly Bell.

After only a few pages, I found I could not put this book down, despite the late hour. Was this also the effect of some writerly magic at work? Had I fallen under the spell of Amanda and her endearing grandparents? It seems I had. The book is chock-a-block with amusing characters as they go about their daily lives in the quintessential British village. I found it funny, engaging and thoroughly entertaining. I adored Tempest the cat from the moment he hacked a hairball on the carpet.

This book reminds me of other vintage British comedy and mystery books and shows. For some reason, Cold Comfort Farm stuck in my head. In any case it is a pleasure to read an innocent, simple tale without gratuitous sex and violence. The story has one foot planted firmly in the past, in a  time when neighbors looked out for each other, without losing sight of the modern world.

There is a fair amount of back story here, which makes it clear that there are more Amanda Cadabra capers to come.

Recommendation: I think anyone who enjoys quirky British humor and 'cozy' style writing will love this book.