Into the Suffering City: A Novel of Baltimore by Bill LeFurgy 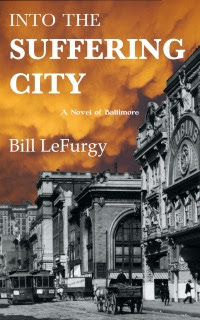 Sex: 💗 no sex scenes, some references to sexual acts, nothing graphic
Violence: 😧 lots of fights, nothing too graphic

Reviewers Note: I was given a free copy of this book in exchange for a fair and honest review.

Author Bio: Bill LeFurgy is a professional historian and archivist who has studied the seamy underbelly of urban life, including drugs, crime, and prostitution, as well as more workaday matters such as streets, buildings, wires, and wharves. He has put his many years of research experience into writing gritty historical fiction about Baltimore, where he lived for over a decade. It remains his favorite city. Bill has graduate degrees from the University of Maryland and has worked at the Maryland Historical Society, Baltimore City Archives, National Archives and Records Administration, and the Library of Congress. He has learned much from his children and grandchildren, including grace, patience, emotional connection, and the need to appreciate different perspectives from those on the autism spectrum and with other personality traits that are undiagnosed, misdiagnosed, or unexplained.

Plot in Brief (no spoilers)  When prostitute Lizzie Sullivan is found shot to death, Horace Shaw, a wealthy Baltimore businessman with political aspirations, is charged with the crime. Dr. Sarah Kennicott, who is present at the autopsy disagrees with the pathologist's findings. Private detective Jack Harden is hired to help prove Shaw's innocence. Sarah and Jack team up to find the true killer.

The Characters: The pages of this book are brimming with colorful characters that inhabit the teaming streets of turn-of-the-century Baltimore. Sweet prostitutes, crooked Irish policemen, piano-playing African Americans, rotten politicians with a few high society swells jostle for attention. The city itself is also a character. The author clearly loves this city and is intimately acquainted with it's history.

The main characters are Jack and Sarah. Jack is a down on his luck detective with a host of personal demons. I struggled to like Jack, I'm not sure why, but there was something about him that put me off. Sarah is the most interesting and original character in the book, she is both a doctor, unusual at the time, and she is on the autistic spectrum. LeFurgy does an excellent job of making her a believable character who garners the reader's sympathy early on. As she struggles to make a life for herself in a man's world and gain acceptance for her neurodiversity, I cheered her along.

The Writing:  The writing is good and the book is well edited. The pace was slow in parts, I felt it dragged in parts, especially when the author is describing the city. The story is told from two points of view, that of Sarah and Jack.

Overall: I liked the book, but not as much as I wanted to. I thought some of the characters were formulaic and more like caricatures than real people. I enjoyed the murder mystery/crime investigation portion of the book, the whodunit was well done. I especially liked the emerging crime science of fingerprinting and fiber analysis as well as the budding field of psychology. I love a good historical setting and the city of Baltimore sounds like it was quite the place in early 20th century America. I appreciate the fact that the author chose to set his story in the squalid underbelly of the town, and did not hold back on the stark reality that was the life of the poor.

I admit that there were times when I was not sure if I was reading a travel book or a crime story. The street by street, building by building descriptions dragged the storyline to a halt and I was impatient to get back to the crime solving. I confess to skipping a few pages.

Recommendation: I think this book will appeal to lovers of crime fiction set in the past. Anyone with an interest in early crime scene investigation will also enjoy this story. I also think that the sympathetic portrayal of a character on the spectrum as a successful independent woman should appeal to lots of readers.