Against The Machine: Luddites by Brian Van Norman 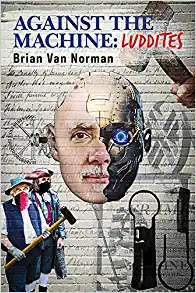 Violence: 😲😲 significant violence, but nothing gratuitous or too graphic
Sexual Content: 💗 minimal, nothing to make you blush


Author Bio: Once a teacher, theatre director and adjudicator, Brian Van Norman left those worlds to travel with his wife, Susan, and take up writing as a full time pursuit. He has journeyed to every continent and sailed nearly every sea on the planet. His base is Waterloo, Ontario.

Basic Plot: Against the Machine: Luddites is the fictionalized story of the Luddite movement in Yorkshire, England. The Luddite movement swept across Northern England during the time of the  Napoleonic War and the American War of 1812. The story is centered on a young leader, George Mellor and his cohorts in their attempt to bring attention to the plight of mill-workers facing displacement by machines. As the violence escalates on both sides, the fate of the rebels is sealed. The mill-owners want nothing less than their annihilation.

The Characters:  The tale of the Luddite Movement is a complicated one and there were numerous key players. Against the Machine tells the story from both sides; the rebellious workers and the pitiless mill-owners. With that being said, there are a substantial number of characters in this book. Most, if not all, are based on the real people involved, including Rebel leader, George Mellor, the Magistrate, Joseph Radcliff and the British Army Officers, Captain Frances Raynes and Sir Thomas Maitland, whose jobs it was to rout out the rebels and bring them to justice. Also included are a handful of clergymen who played a pivotal role on both sides. The Reverend Patrick Bronte, father of the Bronte sisters makes a brief appearance.

In a novel with this many characters, it is sometimes difficult for the reader to keep them all straight and I admit that this happened to me in the first few chapters of the book. I eventually got them in line with the help of the author who does an excellent job differentiating their personalities and making them stand out as individuals. Van Norman clearly put in an enormous amount of research while preparing for this book and it shows.

The History: The early 1800s is an interesting time in England. Changes, driven by the Industrial Revolution and the Enclosure Acts, turned society on it's head. The rich got richer and the poor, well, the poor got really poorer. The downtrodden and destitute were all but voiceless, their needs and desires, even for basic necessities, were of little concern to their economic betters. It really was a case of the haves versus the have nots. It's a painful time, despite the glories and riches the economic boom brought to the upper and rising middle classes.

This book brings the plight of the mill-workers to life. From the description of their clothing, food and housing in contrast with the wealthy owners who exploited them, we feel their hunger and desperation. I think Van Norman did a fantastic job of humanizing their conflict.

The Writing: The writing is strong, the book well edited. The story is told in 3rd person omniscient, so we get just a peek into everyone's head. The one thing that I didn't really care for was the foreshadowing of the fate and actions of the rebels and other characters. I felt the device was overused and perhaps spoiled  some of the action for me.

My Thoughts: I was excited to read this book for several reasons, the first of which is my general love for English history. But the telling of history is often a glossy affair; we read about kings and queens, triumphs and achievements, and let the unpleasant stuff fall to the wayside.

My favorite author, Jane Austen, penned her books during the time period which included the Luddite Movement. It is amazing to contrast her vision of England, which appears on the whole to be idyllic and tranquil, to the dark brutish reality portrayed in this novel. Jane's world is one of ribbons and dances, and yes, slights and snubs from social superiors. Occasionally, Austen dips a toe into the inequality of the times, but everyone at Pemberley is well fed. If we yearn for those long lost days, a simpler, happier life, then Brian Van Norman is here to tell you otherwise.

Lastly, I was drawn to this novel because my own ancestors hailed from Manchester, England, where there was not only Luddites attacks but food riots as well. Originally agriculturalist, my family left the land for jobs in the mills. My great-great grandparents were cotton spinners and they frequently found themselves or their children in the dreaded workhouse. The dehumanizing world of the Luddite was their reality.

Recommendation: Warning: this book is not an easy read, it's complicated with many moving parts. I would describe it as a thinking person's book, indeed it forced me to drag down my history books and review the Luddite Rebellion.  The author asks his reader to look below the still surface of our history and come face to face with a reality that is not pleasant. The tale of the Luddites is painful one and there are no happy endings here. But, it's an important time in our history and the story has implications for today's world. As men are replaced by machines and robots, economic prosperity becomes an intangible dream for the working-poor. And when some in our society can once again look at an entire class of people and not see them as individuals, but only as a seething mass, we are in big trouble.