But for Freedom; Across the Sea Beyond Skye: by Elizabeth Rodger 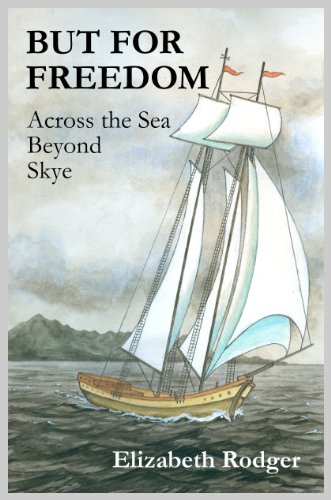 Reviewers note: a free copy of this book for a fair and honest review. If you are interested in viewing or purchasing this book, click on the cover of the book or the buy now button at the bottom of the review.


The Plot in brief: The story follows the plight of the McKenzie Family, Donald, Morag and their children in the of Culloden in 1746. This decisive battle between Jacobite Highland forces loyal to Bonnie Prince Charlie, the Stuart Pretender and those who supported King George I. The Highlanders   and in retribution  of their inhabitants. The McKenzie family decide to abandon Scotland and immigrate to Virginia.

The Characters: The main characters of the story are the McKenzie family with emphasis on Donald, his wife Morag and their eldest son Robbie. They as a loving, hardworking and god fearing family. Other characters either help or hinder the in their quest for economic stability and include African slaves, Native Americans, fellow Scottish immigrants and the occasional Virginian. Some are predictable in their actions and some crossover into caricatures which I found a bit off-putting. This was especially true of the Native American character and some slaves.


The History: It is clear the author has done her homework and done it well. The historical setting rings true from the lifestyle, food, clothing, habitation to cultural and religious customs of the day. I enjoyed the description of the mountains of the Highland Glens, as the McKenzie's flee the wrath of the soldiers. The hideous sea crossing is and makes me wonder how anyone survived. I also enjoyed the depiction of life in 18th century Williamsburg, Virginia. Although familiar with indentured servitude, it was very interest to read about the process once the individual landed in Virginia; I had no idea how the process worked and found it enlightening.

I did not spot a single thing that sounded out of place. Well done.


The Writing: The book in 3rd person, past tense with multiple POVs. I'm not a fan of head jumping within a chapter which happens here, but it wasn't too distracting as the author makes clear who is controlling the narration. The book with very few typos. pace is slow, and I ahead to see if something more interesting was coming around the corner. ﻿

I an issue with the dialogue which is all written in the . The Scottish speech is difficult to read at first and once I got the hang of it I still found it irritating. African slaves have their own speech style as does the Native American.

into a very formal stiff sounding narration. The juxtaposition was jarring. I'm all for using 'big' words when 'big' words for but I felt the narrative flow rubbed against the simplistic spoken language and the two didn't always get along and occasionally made for a boring read.


Overall: Overall, I enjoyed But for Freedom: Across the Sea Beyond Sky. I thought the historical aspect highly interesting and kept me reading when otherwise I might have put the book down. I appreciate the amount of research that went into the story and it always a bonus when I learn something new, which I did! The author did an excellent job of immersing her readers into the setting.

I look forward to reading and reviewing Book 2 of the series: But For Freedom: A Rebellious Echo of the White Cockade, which follows the through the American Revolution. ﻿

Recommendations: I would recommend this book to lovers of historical fiction, especially those who enjoy Scottish or Colonial American history.

5 Stars: So good, I might read it again sometime! Highly recommend.