Palm Trees in the Pyrenees by Elly Grant 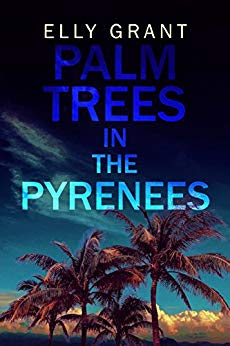 
The Plot in brief: Danielle is a thirty-year-old policewoman in a small French town. She feels insignificant and unappreciated until a disliked foreigner falls to his death. Was it an accident or was it murder? Can Danielle solve the murder and get the recognition and promotion she deserves?

The Characters: Danielle is a likeable woman with a sympathetic personality. We see her change over the course of the book into a strong, confident woman, a phrase which the author repeats multiple times in case you don't quite get it.  quite a collection of suspects, which took a while for me to sort out, but I thought they were believable and interesting in both their motivations and actions. ﻿﻿

The Writing:  Opening with the death of the victim, the story moves into a chapter in which Danielle herself speaks directly to the reader, a writing device which I do not care for, unless done extremely well. The of the book  in first person POV- present tense, my least favorite style to read, as the narration  to a 'then I did this and then I did that' feel, which is sometimes the case in this book.

The pace is pretty zippy and there are a few interesting twists and turns as each of the possible suspects shares their story with Danielle. dialogue is fussy and formal and doesn't sound natural, especially between Danielle and her best friend, Patricia.

The book , without obvious errors. Yea!

Overall Opinion: The murder-mystery part of the book was entertaining, and I enjoyed the setting.The story itself reads more like a cozy murder mystery, nothing too graphic, except for a liberal use of the 'F' word. Danielle comes off more as a sleuth than an actual detective and there is very little police prodedure in the plot.

I did not like the juxtaposing of Danielle as a modern day policewoman with stodgy, ancient biases against women in positions of power. Maybe if the book in the 1970s or 1980s, the overt attitude against women might be more believable but I found it out-of-place in what seemed to be a modern day setting. ** Addendum to review: Elly Grant contacted me and assured me that there are still remote areas of France were people still hold a prejudicial view of women in positions of power, including police work. **﻿

Recommendation: I would recommend this to anyone who enjoys cozy murder mysteries in an interesting setting. It's a quick, easy read and once you get the characters straight, there's not much to do but turn the page. A good beach read or just want a quick, entertaining story.