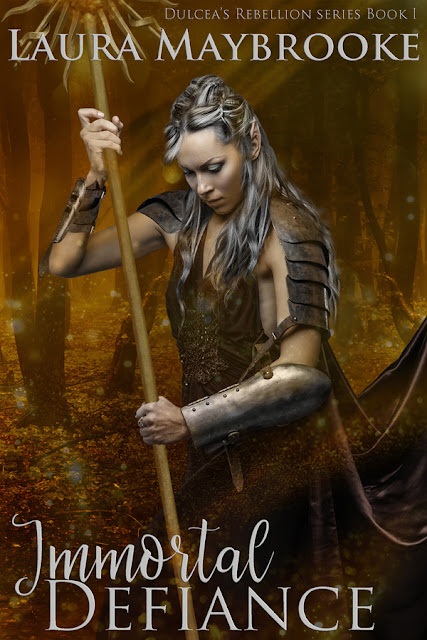 Immortal Defiance by Laura
Self-Published October 2019
Genre: Fantasy / Paranormal
Pages: 378 (-book)
Series: This is B One in a series of three
-book and paperback

Reviewers Note: a free copy of this book for my honest opinion. If you are interested in viewing this book on Amazon, click on the book cover above.

The Plot: Lady Dulcea, Enchantress, Dragon Mistress and leader of a rebellion by a scored suitor and fellow countryman. Turned over to the enemy, she faces certain death. Moments before she is to , she  by a mysterious stranger who spirits her away to his castle. Lord , she learns to her horror, is old vampire. As they come to know, trust and respect each other, Dulcea hopes that he might be the answer to winning the war and freeing her homeland and people.

World Building: The author put an enormous amount of work into building the world of Dulcea and Lord Krath. Descriptions of, housing/shelter, clothing, the calendar, and many other intricate details fill the pages. I enjoyed the varied descriptions of Dulcea's culture including religions and religious ceremonies, courtship, marriage and interpersonal relationships. The author takes the reader on a highly descriptive tour of Lord Krath's castle and gardens which add to the authenticity of the story. I think Maybrook did an excellent job in creating the world of .

The Characters: The book is brimming with characters: a wide variety of elves, humans, vampires, dragons, gods and goddesses, barbarians and even a dwarf or two. It is possible, I've left some out. I admit, I , not only who was who but who was what.

My favorite character was Lord . I enjoyed his very inventive story; he's not your average vampire. I thought he was the most interesting character in the book, and I looked forward to his appearance on the page. Dulcea was in theory a complex character but in her. She's an enchantress, we , but other than a spell or two to disguise herself she does no enchanting. She's a dragon mistress but has little interaction with her dragons. I would have enjoyed seeing her flex her powers and display the qualities that make her the leader of a rebellion. ﻿﻿

The Writing: My major complaint has to do with the writing. I did not enjoy the narrative voice of the book. Written in what I assume   archaic and formal, the weird syntax often left me rolling my eyes. There were many sentences that did not make grammatical sense or did not mean what the author intended. Overall, the pedantic language bogged down the story, forcing the reader to slog through an excess of words.

A minor quibble. The story does not unfold , rather it jumps back and forth in time. These chunks of backstory interrupt the flow of the plot. Often, I thought the backstory more interesting that the current plot-line and when plopped back into the story. I for a start to finish telling of Dulcea's life, instead of hopscotching back and forth into the past. ﻿

Overall: I appreciated the amazing world created by the author. If world building is the icing on the cupcake, then this is a well-iced treat. But, what of the story, the cake under the fancy topping?  I found the backstory more engaging that the current plot-line; the exception being the slow building relationship between Dulcea and . I did not care for the abrupt ending which did not offer a resolution to many of the conflicts in the story arc and left me bewildered and unsatisfied.

There is a lot to love about this book, despite the bumpy ride. Kudos to Laura  for an impressive undertaking. I think if she tightens up her editing, the pace will pick up and her writing will really shine. I imagine the relationship between the main character will continue to grow and romance will play a role in their stories.

Recommendations: I would recommend Immortal Defiance to readers who enjoy highly descriptive fantasy, those that appreciate the effort required to build a believable world and  invest the time to read multiple books to get the whole story.

My Rating: I give this book 3 1/2 dragons 🐉🐉🐉⋆      (sorry couldn't resist)
I always round up for Amazon and Goodreads and in my rating
on their websites.